Thousands of fraudsters are selling via Shopify, analysis finds 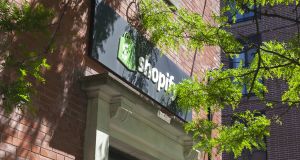 Tens of thousands of sellers are using the ecommerce platform Shopify to scam consumers and sell counterfeit goods, after the company’s rapid growth has left it exposed to fraudsters.

According to the ecommerce authentication service FakeSpot, which analysed more than 120,000 Shopify sites, as many as 21 per cent posed a risk to shoppers.

Shopify has been one of the big corporate winners of the pandemic, with brick-and-mortar retailers rushing to the platform - which offers tools to quickly start selling online - as lockdowns took effect.

But con artists have been just as nimble. Some shops appeared to be fronts for collecting personal data without any intent to actually deliver a product, FakeSpot said. It also identified a range of other issues including brand infringement and extremely poor customer service.

“With the trajectory of Shopify’s growth, there comes a point in time when they will need to tackle this problem very seriously,” said Saoud Khalifah, FakeSpot’s chief executive. He explained that many of the stores they found appeared to be China-based merchants posing as US small businesses.

A spokeswoman for Shopify said the service faced an “industry-wide” problem. It would not share its process for verifying the location of businesses, citing “security reasons”.

“We recognise there will be those - however few they may be relative to our base of more than one million merchants - that may abuse our service, and we take this matter seriously,” the spokeswoman said, adding that the company had employed “multiple teams” to combat the issue, though she declined to say how many people it had working on it.

“To date, we have terminated thousands of stores and routinely implement new measures to address fraud and other activities that violate our policies. Although these issues challenge the ecommerce industry at large, Shopify is committed to being part of the solution.”

After being alerted by the FT, Shopify suspended two sites. They included MDRN Supply Co, which appeared to be selling counterfeit goods imitating products from luxury brands Supreme and Louis Vuitton. Previous customers had left reviews on third-party sites, such as the Better Business Bureau, accusing it of not fulfilling orders. Its owners could not be reached for comment.

Touted as the “anti-Amazon”, Shopify’s software offers templates, inventory management and secure payment functions on a retailer’s own website, rather than having to compete on the cut-throat Amazon marketplace. Since March, Shopify has more than tripled in value; its market capitalisation is now about $140bn.

But unlike Amazon, where negative reviews or a high percentage of returns can quickly see a seller down-ranked or removed, the decentralised nature of Shopify means entire stores can operate with no obvious signs that its customers are unhappy.

New business is often attracted via advertising placed on social media, particularly Facebook and Instagram, where legitimate retailers are mostly indistinguishable from suspicious ones.