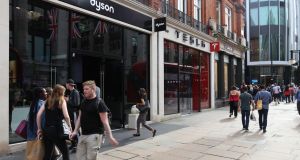 Dyson Holdings reported a 17 per cent jump in profit in 2019, a year when the home appliance maker decided to move its headquarters to Singapore from the UK and abandoned efforts to develop an electric car.

The company, best known for its vacuum cleaners and hand dryers, made a net income of £711 million (€787m) last year, it said in filings in Singapore. That was after taking a £198 million hit from discontinued operations, including its automobile project. Revenue rose 23 per cent to £5.4 billion.

The results show the underlying business of relatively low-tech household machines is still going strong as its owner James Dyson, an outspoken Brexit supporter, pivots the company’s operations from the UK to Asia.

Dyson was planning to spend about £2 billion on the electric car and collected 400 engineers to work on the secretive project at an abandoned British Air Force base, only to disband it altogether in October last year.

The company has since switched its focus to machine learning, robotics and other technologies, and is developing a new global headquarters at an old power station in Singapore. The company is opening a new manufacturing hub and starting a university programme targeted at product development.

Dyson has also designed plans for an air purifier that could double as a pair of headphones, at a time when face masks have become must-have accessories to fight the spread of coronavirus. The company previously said it intends to hire more than 2,000 people in Southeast Asia over the coming years. However in July, Dyson said it will cut 900 of its 14,000 jobs globally due to the pandemic.

The company said its results for 2018, when Dyson became the wealthiest person in Britain, were restated to reflect a change from UK to Singapore’s accounting policy. – Bloomberg