This week we’re talking about . . . the Web Summit

Gone, but not forgotten, the event suits Lisbon more that it suited Dublin 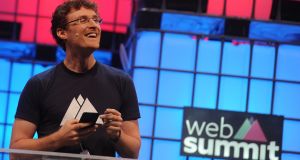 Paddy Cosgrave, chief executive officer of Web Summit. The Lisbon venues hold up to 80,000 people so it didn’t feel half as cramped as the RDS. Photograph: Paulo Duarte/Bloomberg

If you aren’t familiar with the Web Summit, it’s the Irish founded tech conference that started in Dublin in 2009 with less than 400 attendees and grew to around 40,000 by 2015. A homegrown success story and a showcase for Ireland’s tech hub credentials.

It’s that time of year again, I guess

Yes, it is. But the twist in the tale is that this time, the Web Summit has taken up residence in Lisbon. It will be there for the next few years, leaving Dublin behind.

Ah. I’d forgotten about that.

Easily done. Out of sight, out of mind. Except it hasn’t really been out of sight because the Irish media has been covering both the move to Portugal and the conference itself.

Remind me again why it moved?

It wasn’t an easy break-up. Co-founder of the event Paddy Cosgrave had some pretty sharp words for the Government and State agencies about their support of the Web Summit, and also some criticism of the infrastructure in Dublin too. Hoteliers also came under fire for jacking up their prices around the event.

Is any of it justified criticism?

Hotels increasing their prices isn’t anything new, and it’s certainly not confined to Dublin – ask anyone who has attended CES how much they pay to stay in the Stratosphere for the opening night of the Las Vegas based conference, then look at the price of the hotel when the tech show isn’t in town.

In saying that, hotels in Lisbon could still be bought for a reasonable amount close to the Web Summit’s opening, possibly down to the sheer number of hotel rooms on offer.

But – and this is a big but – the Web Summit organisers certainly had a point about the facilities for large-scale events in Dublin. The MEO and FIL venues can hold up to 80,000 people, making it bigger than any indoor conference venue in Dublin. With 53,000 registered attendees at Web Summit 2016, it didn’t feel half as cramped as 40,000 in the RDS.

The MEO and the FIL are two separate venues, separated by a small road. Most of the Web Summit was held in the FIL, but the centre stage was in the MEO, which has a capacity of 15,000.

The end result? It felt a lot more spacious and startups in particular could be easily found.

Did the wifi hold up?

Mostly. There were definitely some teething troubles on the opening night. There were some complaints during the opening ceremony that the wifi had stopped working, although with thousands of people in the MEO all with multiple devices, a few hiccups were inevitable.

It might have passed without too much comment, but for the fact that Cosgrave decided to demonstrate the event’s Facebook Live stream of the event on stage. Cue the excruciating moment when he couldn’t connect.

He later said it was down to being connected to the wrong network, and not the event wifi at all, and the official Web Summit response was that it was a technical glitch with his phone. The damage was done though; it was the topic of conversation for the evening.

But in general, how did it go?

It went well, actually. The Web Summit in Lisbon is a far better affair, simply because it has the space it needs. While it was pulling in 20,000 people, Ireland could cope with it. Yes, there was a bit of traffic chaos, but as people who chose (unwisely) to take a taxi to the MEO-FIL arena over the few days of the Web Summit may agree, traffic chaos isn’t confined to Dublin.

The difference is that Lisbon has an underground system that has a stop right at the Web Summit location, so you could get there with minimal hassle. Dublin doesn’t have this, which is a major disadvantage.

Then there is the actual conference location. If you remember the final RDS event, the Web Summit was split across two halls, which involved leaving the main hall or Simmonscourt and trekking down the street. Not the most arduous of journeys but it was certainly longer than the trip between the MEO and FIL: add in a good dose of Irish rain, and it wasn’t the most pleasant experience.

Startups in particular appeared to get a better deal in Lisbon, and could actually be found by investors because they didn’t have to plough their way through a mass of people.

What about the speakers?

There were a few high-profile names. Actor Joseph Gordon-Levitt made an appearance at the opening night. Former footballers Luis Figo and Ronaldinho were also there, along with a list of tech executives and founders. There was no Elon Musk driving on stage moment, but Dave McClure, founder of 500 Startups, and his outburst following Donald Trump’s win over Hillary Clinton in the US election, will probably go down as one of the most memorable moments of 2016.

Did anything go wrong? Apart from the wifi incident

Not everything was perfect. The opening night was vastly over subscribed. To be fair, the organisers had warned people to get there early to ensure they got into the main stage area. But by the time things kicked off, there were a few thousand people stranded outside, watching the event on large screens. And while November in Portugal is warm enough during the day, at night it’s not quite as balmy.

Some of those stuck outside took to Twitter to vent their frustration, complaining they had paid for tickets. But realistically, we can’t say we weren’t warned. A 15,000 capacity venue was never going to fit 53,000 people.

What’s the final verdict then?