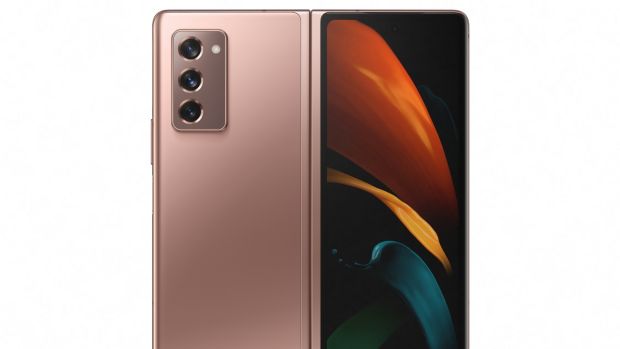 When you are using an app on the inner screen and need to fold it away, the app will pick up on the front screen and allow you to keep going.

Folding phones are one of those things that we aren’t sure we need, but some of us nonetheless want. A foldable has all the benefits of a small tablet in a phone we can slip into our pockets – or small handbag – and it feels more than a little cool to open the up into the larger screen.

But the original Samsung Galaxy Fold had its issues. There were questions about its screen. When reviewers start peeling layers off a phone that shouldn’t be removed, then you might want to rethink the design. Then there was the durability, with the original not rated to resist water or dust –– a particular concern where the hinges were concerned. The Fold was delayed while the issues were resolved, and then, in September last year, finally it was released.

It was a reminder that buying the first generation of any new device is always risky. But Samsung has learned from its experience with the Fold. Now we have its successor, with a bigger screen, better design and an extra Z in the name.

The Z Fold2 comes with a bigger and better display, not just on the outside, where the original Fold limited it to a little over four inches. The inner display is now 7.5 inches instead of the previous 7.3 inches, and while it may not seem like much, when you see it in all its Super Amoled glory, it reminds you sometimes bigger can be better.

Folded in half, the Z Fold2 is bulkier than your average smartphone, but despite that, it didn’t bother me too much. There are other challenges, such as the size of the screen and how you type on it. The keyboard is split in two, so you can attack it two-handed. It’s surprisingly comfortable to type on, once you get the hang of it.

Apps now take advantage of the bigger screen, making it handy for streaming video, or reading e-books. Gmail displays better, with your inbox on one side and the message you are reading on the other. Netflix looks great on that inner screen too, making the Fold2 a phone you’ll spend a lot of time with. And the quality is superb: video is sharp, text is crisp.

That’s as it should be, given the price tag. The Fold 2 will cost you €2,099 without a deal with operators, making it almost twice as expensive as most top-end smartphones. It has to work hard to justify that price, if it wants to be something more than a niche product.

It seems like it will, with the focus on its credentials as a work device. While it’s great to get in some binge watching with the Fold2, it works even better for mobile working. The split keyboard makes it easier to type while holding it, and it’s not uncomfortable to use either. In fact, the bulk of this review was typed on the Fold2.

Multitasking allows you to open three apps at once, which makes the Fold2 an even more attractive device for working on.

The small front display has been bumped up to 6.2 inches, which makes it far more functional. You can access your apps on that screen, just as you would on a standard phone. When you are using an app on the inner screen and need to fold it away, the app will pick up on the front screen and allow you to keep going.

You can prop the Z Fold2 open at different angles, making it easier to angle the camera for a photograph, or position it for a video call. Flex mode splits the screen in half for some apps; not all apps take advantage of that as well as they could, but there are some that use it in more creative ways. The camera, for example, will show you the live view on the top screen, and your previous shot on the bottom.

The camera may be a disappointment to some. While it is excellent, it pales beside the cameras built into the S20 Ultra and the Note 20 Ultra, lacking the advanced zoom lenses. You only get a 2x zoom which, considering the firepower the its sibling phones have, seems a little underpowered.

The quality of the shots can’t be denied though, even if the zoom could be improved.

Both displays are useful, and the quality of the inner display is great. You barely notice the fold in the screen. For work purposes, the multitasking support is crucial, with the ability to work between three apps on the screen at once.

While that 7.6 inch screen looks great, it’s also a fingerprint magnet. That takes away from the look of the device, but it’s easily fixed with a quick clean. What you’ll probably feel is that on the face of it, the Z Fold2 is less durable than most premium smartphones. It lacks water resistance and doesn’t work well with dust, so keep this one well away from beaches, pools and any other danger zones. Having said that, it stands up to minor bumps (and that’s all I’m saying about that incident).

The fingerprint reader is built into the side button. That can make it a bit hit or miss at times, because it doesn’t seem to read as well when the phone is folded closed.

**** Great, but not yet perfect. Overall, the Z Fold2 seems like something to get excited about.