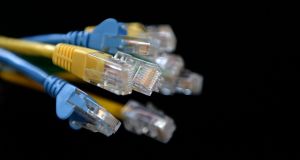 The Government plans to award two subsidised contracts for the rollout of high-speed broadband across rural Ireland later this year. The scheme is likely to cost up to €1.5 billion, with the State expected to stump up half the money. Photograph: Andrew Matthews/PA Wire

Telecoms firm Enet has signalled its intention to bid for the Government’s rural broadband scheme. The tender will be awarded later this year. The company, which manages 94 State-owned metropolitan area networks, is owned by a consortium of US investors, which includes Oak Hill Capital, a $23 billion hedge fund.

Enet chief executive Conall Henry told The Irish Times the company had the financial clout and technical expertise to operate the proposed network, which will connect up 757,000 homes to high-speed broadband. He believes publicly funded communication networks should, however, be operated on “wholesale-only basis” to ensure fairer competition between retailers, while acknowledging the specifics of the Irish case, in terms of cost, limit the Government’s options.

The scheme is expected to allow the winning bidder or bidders to operate the network as well as sell into the retail market, while insisting the businesses operate separately. This is known in the trade as “functional separation”.

In the UK, BT’s infrastructural arm Openreach operates separately from its retail business. However, communications watchdog Ofcom recently published a report calling for the model to be reformed to offer consumers and businesses a choice of networks.

While the UK regulator’s intervention stopped short of recommending splitting the business away from BT, as had been mooted previously, it reignited the debate about the future of BT’s wholesale arm.

“If the same guys own the infrastructure and the service, the incentive is there to favour your own retail brand,” he said, noting his company was the only large player in the market which did not have a retail arm.

“Large providers of services in other sectors like aviation and electricity don’t own their own networks and large providers of networks don’t need to be service providers. If we [Enet] can only make money by having as many operators on the network as possible . . . that’s what we’ll do and that tends towards better policy,” he added.

His views broadly echo those of economist Colm McCarthy, who recently penned a report warning that the Government’s broadband plan had the potential to erode competition in the sector, resulting in higher prices and poorer services.

While the Government has still to decide on who will own the network, Mr Henry believes the State-owned model is probably more appropriate “in that if the State is funding its construction, that funding should be recognised”.

The Government plans to award two subsidised contracts for the rollout of high-speed broadband across rural Ireland later this year. The scheme is likely to cost up to €1.5 billion with the State expected to stump up half the money.

Poor-quality rural broadband has been highlighted as a contributory factor in Ireland’s two-tier economy.