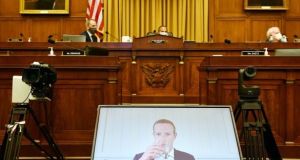 There may be plenty of businesses suffering as a result of the Covid-19 crisis, but the tech giants are not among them.

Just a day after the chief executives of Amazon, Google-parent Alphabet, Apple and Facebook, were hauled before Congress to answer claims of market dominance, the four companies announced eye-watering results once again.

Indeed, they reported a combined quarterly profit of $28 billion (€23.6 billion), which at the time when the global economy is in free-fall, is more than a little impressive.

For the world’s richest man, Jeff Bezos, in particular, there was plenty to celebrate as Amazon posted record profits with net sales jumping 40 per cent to $88.9 billion as consumers turned to online shopping during the lockdown. Apple revenues rose 11 per cent to $59.7 billion, despite most of its physical stores being closed. Facebook also reported an 11 per cent increase in turnover to $18.7 billion with its earnings-per-share up 98 per cent. Only Alphabet bucked the trend by reporting a decline in second quarter revenues to $38.3 billion but still easily beat analysts’ estimates.

By anyone’s standards the figures are mind blowing. So while Messrs Bezos, Cook, Pichai and Zuckerberg might have looked a bit sheepish on Wednesday as they were quizzed by a congressional committee over alleged anti-competitive practices, all likely ended the week with big smiles on their faces.

Each faced awkward lines of inquiry during that landmark congressional hearing but no killer blows landed. Was anyone surprised to learn that Mark Zuckerberg had a plan to neutralise competitors ahead of its acquisition of Instagram for example? Or that Mr Pichai struggled to answer why it is that Google steals content?

It is certainly entertaining to see the tech bros squirm but there’s no doubting that however embarrassing the event was, the last laugh is on us. If there are plans to bring big tech into line, a tougher hand will be required than anything we have seen to date.