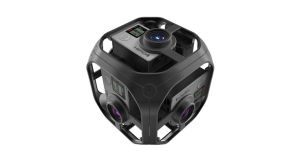 It’s the year of virtual reality with headsets from HTC, Oculus, Samsung and Sony set to fight it out for consumers’ cash over the coming months. But it’s not enough to just view others’ content; sooner or later you’ll want to make your own.

If you have a spare $5,000 burning a hole in your pocket you can try the GoPro Omni Camera – six GoPro Hero 4 cameras in one array that allows you to shoot 360 degree action footage and turn it into your own VR studio. The cameras are synchronised so you can just shoot and go, and the whole package includes Autopano Video Pro and Autopano Giga to refine and make edits.

1 Who are Ireland’s 17 billionaires?
2 My father in a nursing home wants to gift me his house
3 The entrepreneur who went from ‘total poverty’ to a Lamborghini
4 Are there annual limits on inheritances or gifts to a child?
5 State subsidises public sector retirees to cover gap until State pension
Real news has value SUBSCRIBE