Tech companies look to break down the walls between apps 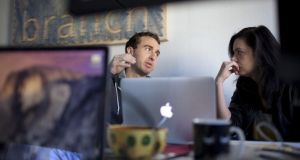 Alex Austin (left), chief executive of Branch Metrics, which is trying to create a universal web address that would work across apps as well as the web. Across Silicon Valley, companies from tiny start-ups to titans such as Google and Facebook are bringing the same simplicity of the web browser to smartphones by teaching apps to talk to one another.

Navigating the internet used to mean painstakingly typing the exact address you wanted into your computer. The web browser and the search engine simplified that, giving us the internet we take for granted today.

Now, across Silicon Valley, companies from tiny start-ups to titans such as Google and Facebook are attempting to bring the same simplicity to smartphones by teaching apps to talk to one another.

Unlike web pages, mobile apps do not have links. They do not have web addresses. They live in worlds by themselves, largely cut off from one another and the broader internet. And so it is much harder to share the information found on them.

It is not just a matter of consumer convenience. For Google, Facebook and any company that has built its business on the web, it is a matter of controlling the next entryway to the internet – the mobile device.

“Google’s whole concept is we’re going to index the world’s information, but they’ve left out a whole lot of stuff: all the things that are inside apps,”says Alex Austin, chief executive of Branch Metrics, a start-up in Palo Alto, California. Branch Metrics is looking to create a universal web address that would work across apps as well as the web.

Say you want a hotel for a weekend stay. You could Google for deals or go to a travel site. But wherever you go on the web, you will not find the rooms on HotelTonight, an app that offers steep discounts for last-minute bookings. The only way to get those listings is to use the app. And if you find a few hotels on HotelTonight, you cannot email them to your spouse, because there are no links to send.

That is one example involving one app. But as people spend more time on their mobile devices and in their apps, their internet has taken a step backward, becoming more isolated, more disorganised and, ultimately, harder to use – more like the web before search engines.

“How remarkable it is that we are back in 1997,” says Roger McNamee, co-founder of Elevation Partners, an investment firm in Menlo Park, California.

In tech speak, the problem is known as “deep linking,” the technological hurdle of giving apps some sort of links, those identifying lines of letters, dots and slashes that make up a web address or URL.

Deep linking is a worry for large tech firms, but it’s also a big opportunity for start-ups looking to unseat them. As Austin puts it, “Whoever gets the best database will win this game.”

Branch Metrics and other start-ups in the field, including URX and Quixey, are trying to become app developers’ go-to technology for deep linking. The efforts vary in scope, and the companies have wildly different business models.

Some liken it to outfitting a house with plumbing after the house has been built. “It’s the exact same problem that Google was chartered to solve,” says John Milinovich, chief executive of URX.

Facebook is attempting to create an open standard of deep links to help apps connect to one another, so that, for instance, someone could go from listening to a band in the Spotify app to finding information about the band’s live appearances in the Songkick app.

With so many companies and investors working on deep linking, the competition has become a problem. That’s because the easiest way to get apps to link as if they were part of the web is to get app developers to adopt one standard that would work across devices and operating systems.

“Once we’re all using the same plumbing, everyone can go and build businesses and interesting experiences on top of that,” says Eddie O’Neil, a Facebook product manager working on the company’s program, App Links.

At the time, the idea of a phone full of apps was new enough that most people were not very worried about whether those apps could link to each other. But today, apps have begun to eclipse the web.

If apps are so much trouble, why use them at all? This is the idea behind another kind of start-up: those trying to turn the link problem on its head by making websites work more like apps.

Famo.us, base in San Francisco, develops software to repackage websites so they can be sold and downloaded like apps, but still can be searched and linked like web pages. Chief executive Steve Newcomb calls efforts to add links to apps “duct-tapey” solutions that are more trouble than they’re worth.

Some app makers may resist any of these solutions, especially if they are doing brisk business in apps. It would be hard to index something as complex as HotelTonight’s rolling hotel inventory, for example, without having those services give some search engine a continuously updated feed of their data, something they would not want to do.

Still, whether it is deep linking or something else, the mobile world will eventually become interconnected, predicts Sam Altman, president of Y Combinator, a technology incubator.

“The thing that made the web so magical was that there is no friction to move from one place to another,” Altman says. “You could move from a song to buying tickets to getting directions.

“People will lose a bit of their stronghold, but it will be unstoppable.”

1 How well paid do you think you are? Here’s how to work it out
2 Life as a Facebook moderator: ‘People are awful. This is what my job has taught me’
3 Flight attendent seeks High Court injunction against Aer Lingus
4 Public could face extra charge for electricity under green subsidy scheme
5 Wall Street hammered on coronavirus fears while Dublin dips 4%
Real news has value SUBSCRIBE