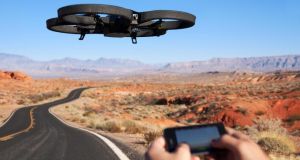 The G8 summit held in Co Fermanagh last week put the subject of drones on the agenda when Enniskillen was caught up in a £50 million security operation involving unmanned aerial surveillance vehicles and no-fly zones.

More than 7,000 police officers were on duty for the summit. The PSNI, backed by 3,600 officers drafted in from England and Wales, mounted an air, land and sea security operation in which three recently-purchased drones were deployed to keep an eye on proceedings from the sky.

The widespread use of drones in Europe is likely within the next few years if EU and US plans to create a new aerospace market come to pass. Authorities are hoping to profit from the creation of a larger commercial drone market which, by UK aerospace group Astrea’s estimate, could be worth over $60 billion per annum by 2020.

Last year, the US Congress gave the Federal Aviation Administration (FAA) until September 2015 to open American civil airspace for their use. A European Commission working paper published in September last year urged member states to develop an EU-wide plan to ensure drones are safely integrated into common aviation traffic by 2016.

The paper, entitled Towards a European Strategy for the Development of Civil Applications of Remotely Piloted Aircraft Systems, predicts that many more applications and uses will emerge once the technology is widely disseminated.

Unmanned aerial vehicles (UAVs) already make up the aerospace industry’s most dynamic growth sector, with more than 400 drone applications in development across the EU. The working paper predicts the new market will support substantial economic growth and generate thousands of highly skilled jobs.

The technology used in drones, usually associated with military surveillance and targeting, is increasingly being used for civilian purposes. While drones are used to survey vast areas of land in the US, the Department of Agriculture said that it does not propose the use of drone technology in Ireland at the moment.

Paul Daugherty, global CTO of Accenture, told The Irish Times earlier this year that Accenture is experimenting with drones that can perform tasks such as pipeline inspections, and other things difficult or dangerous for humans to do .

“You can use visual recognition technology with drones in a very specific way and feed that data back into analytics systems that can then do preventative maintenance.”

In 2009, Tomasz Firek set up a drone manufacturing facility in Skibbereen, Co Cork, and since then his company Versadrones has built more than 180 UAVs.

Firek describes himself as an economist, pilot and inventor who also worked as a photographer until the recession. He says his passion for aerial photography and experience as a pilot led him to diversify into his current business.

“When I began back in 2009, there was no big market for them, but since drones appeared about two years ago, it has grown enough for me to turn it into a business,” says Firek.

He says that he has sold 90 per cent of his UAVs to America and the remainder in Europe, adding that it is only in the last year that Irish customers have placed orders with his company.

The UAVs, which resemble a small helicopter, are 1.3m (4.5ft) wide and have between four to eight rotor blades for stability. They are fitted with on-board cameras and can stay in the air for 30 minutes until they need to land for a battery recharge.

Firek says he began making one or two a month but now makes about 10. “I developed the drones myself – I make the moulds and use carbon fibre for the body. They can carry up to 6kg and are equipped with a GPS, so the person on the ground can pre-programme in the co-ordinates which allows it to fly.”

Aviation regulations governing UAVs in Ireland mean that operators are restricted to flying no higher than 150m and no further than 500m from the control station.

He says that while the word drone has negative connotations, it is the person controlling the drone who causes misuse.

“I don’t like the Big Brother aspect that is associated with drones, but I cannot control what people use them for. Drones themselves are not dangerous, it’s the people who use them,” Firek says.

Marine use
The Shannon estuary off the coast of Clare has become a key European test site for marine robots and UAVs. The University of Limerick is leading the integration and deployment of underwater and aerial technologies to deal with marine emergency responses and environmental disasters.

A two-day exercise was held on the Shannon estuary, the first in Europe, that involved testing remotely operated submarines.

Dr Daniel Toal, research leader at the Mobile and Marine Robotics research centre at University of Limerick, says the use of UAVs is expected to greatly enhance Irish and European responses and containment strategies for accidents.

UAVs fitted with cameras can be launched over a stricken vessel to gather aerial data of oil spills, says Toal. “The UAVs can be used to assess and relay sensor data that allows faster deployment of resources to contain oil spills,” he says.
Land surveying
Mark Hudson, director of Coastway, one of the eight entities licensed to use UAVs in Ireland, says they have been using them for the past 10 months.

Coastway has a team of chartered land surveyors and geospatial engineers who provide survey solutions to the construction industry and advice to the legal profession in Ireland, the UK and internationally.

“We were up at the Bord na Móna peat bog recently and were able to cover 300 hectares in one day with the use of UAVs, a process that would usually take a week with the older technology,” says Mr Hudson.

“We are at the forefront in Ireland for using this kind of technology in our sector. The use of UAVs has allowed us to get projects done faster and more economically,” says Hudson.

He says that while there are eight entities licensed to use UAVs in Ireland, compared to around 200 in the UK, their use will increase in the coming years.