With airlines firmly in the doldrums, the travel software company is under pressure 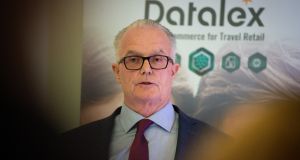 It had been hoped that the new management team – led by chief executive Sean Corkery (pictured) and chief financial officer Niall O’Sullivan – would have been able to publish a set of audited accounts for 2019 before now. Photograph: Tom Honan 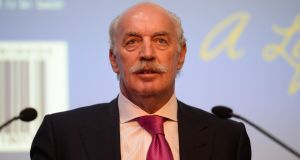 Datalex has been kept alive over the past year by loans from its main shareholder, Dermot Desmond’s Tireragh company. Photograph: Dara Mac Dónaill

US billionaire investor Warren Buffett, who has had a love-hate relationship with airline stocks over the years, told shareholders in his Berkshire Hathaway vehicle last weekend that he has cleared out of the sector as companies in it fight for survival.

“The world has changed for airlines,” he said. “I don’t know that three, four years from now people will fly as many passenger miles as they did last year.”

As Covid-19 rips through economies, few industries face more uncertainty about what the future holds than aviation. Tales of woe continue to mount.

On Wednesday, Dublin-based jet lessor Avolon, which has 150 airline customers in 62 countries, said carriers accounting for 90 per cent of its rent roll had asked for some form of payment relief.

With government bailouts the only game in town for many, Europe’s largest full-service airline Lufthansa is the latest to wave the white flag. It is currently in talks with German officials over a €9 billion rescue package as it loses almost €1 million an hour while most of its fleet remains idle.

Meanwhile, some 4,500 staff at Aer Lingus, part of the International Consolidated Airlines Group (IAG) since 2015, face an unsettling wait as a union briefings on redundancies, initially scheduled for Friday, have been put off until next week. The speculation is that the company will seek to cull 900 jobs as 90 per cent of its aircraft are grounded and management predicts business next year will be 20 per cent below 2019 levels.

It all couldn’t be happening at a worse time for Datalex, the Irish travel retail software provider to airlines, which was hoping that a grim 2019, dogged by an accounting scandal, would give way to a steadier 2020.

Datalex issued a warning in early April saying it expected a “significant impact” on sales this year as the global aviation industry has ground to a virtual halt.

“This is an unprecedented time for our industry, and it is difficult to accurately quantify the likely impact of Covid-19 on our financial and trading performance at this stage,” it said, adding that it was taking a red pen to staff costs and eliminating discretionary spending to help protect its finances.

Shares in Datalex have been suspended for the past 12 months, after the company failed to file 2018 accounts on time. The final publication of the results in September didn’t help matters, with its then auditors EY refusing to offer an opinion on the numbers due to a breakdown in controls that led to the accounting irregularities.

In some ways, Datalex’s long-suffering shareholders, who saw the value of their holdings slump almost 60 per cent in one day in January last year as the company first disclosed the accounting issues, may be relieved that they haven’t had an active share price to look at in recent times.

Shares in Spanish peer Amadeus have slumped almost 50 per cent since late January. Texas-based rival Sabre has fared even worse, plunging almost 80 per cent, with its woes compounded as UK anti-trust officials put the kibosh last month in its plans to take over Farelogix saying the $360 million (€332 million) deal would stifle innovation and competition.

But the longer Datalex’s shares remain suspended, the more difficult things are for the company.

It had been hoped that the new management team – led by chief executive Sean Corkery and chief financial officer Niall O’Sullivan – would have been able to publish a set of audited accounts for 2019 before now and pave the way for trading to resume and enable the company to raise the necessary capital to underpin the business.

However, Covid-19 has thrown everything up in the air and Datalex said last week that it was availing of leeway being given by market authorities in these challenging times to delay publication of the figures to as late as the end of June. Deloitte was hired in January as the company’s new auditor.

Datalex has been kept alive over the past year by loans from its main shareholder, Dermot Desmond’s Tireragh company. When the facilities were increased late last year to €11.3 million, they were laden with a series of onerous conditions to provide an incentive for Datalex to refinance them as quickly as possible through a share sale.

They stipulate that Datalex would be deemed to be in default if its revenue or earnings were at least 20 per cent below forecasts, or if its net working capital was less than 80 per cent of projected figures for two consecutive test dates. The covenants were to be tested monthly and based off rolling six-month figures.

The terms, of course, were never envisaged for the type of upheaval that has been created by the coronavirus pandemic. But a breach would give Desmond the right to seize the business.

In fairness, Datalex’s main shareholder, with a 29.9 per cent stake, could have moved on a number of occasions over the past year or so to take control, but hasn’t. Datalex said last week that it was “engaged in positive and constructive discussions” with Tireragh about the possibility of being given debt covenant waivers “to preserve maximum flexibility to operate the business through this challenging period”.

Still, it’s crucial that the situation is clarified if Datalex is to be in a position to fight for new contracts as airlines, faced with muted seat demand in the near term, look at ways to boost their ancillary retail revenues.

It’s impossible to say whether the equity markets will be comfortable enough with the outlook for the aviation industry later this year to support a Datalex share sale to refinance the Desmond loans.

But tentative signs that Asian carriers, a fast-growing customer base for Datalex in recent years, are starting to restart their engines offer some hope.

4 Jack Ma vs Xi Jinping: the future of private business in China