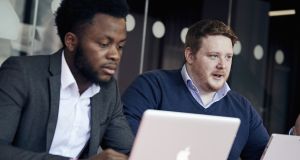 Touchtech is a Dublin-based software company that provides advanced strong customer authentication (SCA) technology for financial institutions. Customers include well-known fintechs such as N26 and Transferwise.

SCA is a new EU regulation that comes into effect in September that is forecast to radically change the way European customers buy online. The legislation, which forms part of the PSD2 “open banking” regulations, requires businesses to build an extra layer of authentication into online card payments.

“Concretely, Touchtech helps banks replace those 3D Secure redirects that ask you what you ate for breakfast in 1993 with a single, secure confirmation on your phone,” he added.

Touchtech was founded in 2014 by Shekinah Adewumi, Niall Hogan and Joseph Kuye, who has since left the company. The company, which emerged from Dublin City University’s UStart entrepreneurship programme, is to relocate to Stripe’s R&D hub in the capital following the acquisition.

“Stripe has given us more resources, a bigger reach and a great opportunity to continue what we’re doing,” said Mr Hogan, the company’s chief executive.

Enterprise Ireland, a long-term backer of Touchtech, welcomed the acquisition with its chief executive Julie Sinnamon saying the start-up “has built up huge strength in their technology, designing and developing an identity verification solution which makes payments easier and more secure”.

“The acquisition of Touchtech by Stripe, a company with its own Irish roots, reaffirms the high-quality credentials of Irish start-ups,” she said.

The deal for Touchtech is the fifth acquisition to be made by Stripe in recent years. Others include Index, a payments company that previously secured financial backing from former Google chief executive Eric Schmidt, Indie Hackers, Tonic and Kickoff.

The company has also backed a number of other companies including fintechs Monzo and Paystack.

Stripe, which has been nominated for two awards in the forthcoming Irish Times Business Awards, was founded in 2009. The online payments company now employs more than 1,000 people globally, including over 150 in Dublin. It handles billions of dollars in transactions each year.

The company last month confirmed it intended to create hundreds of additional engineering jobs in the Republic in the coming years as it secured an e-money licence from the Central Bank.

1 What to consider if older person or loved one needs care at home
2 ‘Essential’ retailers risk a firestorm if they exploit the closure of the ‘non-essential’
3 Fair deal? Family at odds with hospital and each other not so sure
4 Pension auto-enrolment looks unlikely in 2022
5 Streaming services set for Christmas battle after drama-filled year
Real news has value SUBSCRIBE