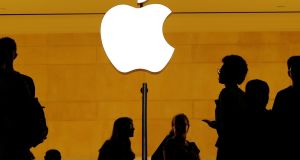 Apple and the Government are both fighting the European Commission ruling at court. Photograph: Reuters

Apple must still pay €5 billion to comply with the European Commission’s order on back taxes to the Republic, nearly two years after the company’s Irish fiscal deals were ruled illegal.

Apple has now paid €9 billion – or almost two-thirds – of the €13 billion in back taxes and €1 billion of interest it was ordered to transfer to the State, the company said in a regulatory filing late on Wednesday. It said €4.5 billion was paid since June 30th.

The tech giant, which reported $53.3 billion (€45.9 billion) in third-quarter sales and beat expectations with its fourth-quarter forecast, declined to comment further. The tax money will be held in an escrow account while Apple and the Republic fight the EU order at court, which will take years.

The Government has said it expects that all of the money will transfer by the end of September, even as Apple and Ireland each pursue appeals against a 2016 European Commission decision that the US technology received illegal tax aid from the State .

Investment firms Goldman Sachs, Amundi and BlackRock had been selected in March to manage the back taxes and interest as the funds are held in escrow, pending the outcome of the European court appeals process.

BNY Mellon was picked earlier this year to provide custodian and escrow services in relation to the alleged Apple State aid recovery process. It will oversee the work of the three investment firms that will manage the funds.

EU competition commissioner Margrethe Vestager has already shown herself impatient with the slow pace of repayment of what she views as illegal state aid from Ireland to Apple. Last year she took the State to court for not getting the money back quickly enough. The EU’s press office said on Thursday that officials were ready to withdraw that suit when all the funds are transferred.

“We continue to be in close contact with the Irish authorities and hope that recovery of the illegal aid is completed in full as soon as possible,” the European Commission said in an emailed statement “That would also allow us to close the ongoing procedure before the EU Court of Justice against Ireland for not having implemented the commission decision.”

The Apple case is the biggest of a wave of investigations that has ordered dozens of companies to repay billions of euros over tax rulings that the EU says were unfair. The EU is yet to decide on cases involving McDonald’s and UK tax treatment of multinational companies. – Bloomberg

1 Why gift a son now if it eats into his tax-free inheritance threshold?
2 Flights abroad ban could last all summer
3 Chris Johns: Economic self-harm is the root of populism
4 Government to avoid ‘cliff-edge’ on Covid-19 payment changes
5 How much do Irish people earn? And what will Covid-19 do to our wages?
Real news has value SUBSCRIBE