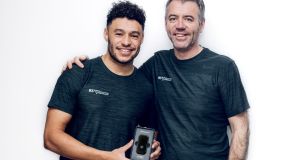 Newry-based sports tech company StatSports is weighing a flotation in about two years’ time, at which point it expects to be worth in excess of £1 billion (€1.15 billion).

The move comes as the company announced that Premier League footballers Raheem Sterling and Alex Oxlade-Chamberlain have both recently invested seven-figure sums in the company in a new funding round that values it at more than £200 million (€231 million).

The sports tech company, which made headlines globally last year when it secured a five-year contract valued at £1 billion with the US Soccer Federation, has developed performance-tracking technology that is used by leading European football clubs including Liverpool, Arsenal, Manchester City, Manchester United, Barcelona and Juventus.

Mr Sterling, who plays for Manchester City and Mr Oxlade-Chamberlain, who is at Liverpool, have each invested more than £1 million (€1.1 million) in StatSports, whose APEX monitoring devices are also used by the Irish Rugby Football Union and sports teams playing in GAA, American football, hockey and basketball.

As part of the deal, the soccer stars are to become global ambassadors for the company, which was founded by Alan Clarke and Sean O’Connor more than a decade ago.

“I see no reason that StatSports cannot be the next billion dollar-plus wearable company,” Mr Sterling said.

“StatSports has already made a big name for itself in the elite game but it’s clear to me that there is huge potential for the technology and that’s why I’ve invested,” the English international added.

Mr Oxlade-Chamberlain, who has worn the technology since his early days at Southampton, was equally bullish about the potential for StatSports to score big. “I am super excited for where this will go, the sky is the limit,” he said. “I am delighted to have the opportunity to invest at this early stage of what I believe will be the Instagram or WhatsApp of wearables.”

The investment by the footballers is the first outside one to be made in StatSports, which has been self-funded to date. The Newry company says it has been profitable since its inception, although it does not publish financial figures.

“The company has been profitable year-on-year without taking any investment since inception in 2009. What is even more remarkable for a technology company to achieve global market leader status whilst being bootstrapped,” said chief global strategist Jarlath Quinn.

StatSports’ technology consists of small devices which are worn in vests and measure and analyse player performance in real-time to provide instant feedback to coaching staff on metrics such as distance and speed, as well as levels of fatigue and injury risk.

While the company is primarily focused on a public listing, it is also believed to be open to a possible sale should a major player be prepared to stump up the cash.

While initially targeted at elite athletes, StatSports last year introduced a consumer version of its Apex solution, which retails at €234.99. In doing this, the company is not only competing with direct rivals such as Catapult, but also with the likes of Apple, Fitbit and Garmin, which are all trying to win over customers for their devices.

By being appointed as ambassadors as well as taking a stake in the company, Mr Sterling and Mr Oxlade-Chamberlain are following in the footsteps of sports stars such as NBA player LeBron James who helped drive sales of Beats headphones and reportedly earned $30 million (€27 million) when the company was sold to Apple in 2014 for $3 billion (€2.6 billion).

Last year, StatSports won the deal of the year prize at inaugural The Irish Times business awards, in association with KPMG. It won the prize for its £1 billion deal with the US Soccer Federation.