Four early-stage companies selected for final of the One2Watch competition 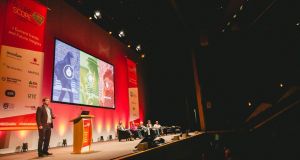 The winner of the One2Watch competition will be given the opportunity to pitch their idea to 1,200 attendees at the forthcoming FutureScope conference in Dublin

Four Irish start-ups have been selected to fight it out in a competition to find the country’s most scalable business idea.

The winner of the One2Watch competition will be given the opportunity to pitch their idea to 1,200 attendees at the forthcoming FutureScope conference in Dublin. In addition, they will also be offered a desk at the Guinness Enterprise Centre, consultancy services and €2,000 in prize money.

The four finalists – WeSavvy, ProVerum Medical, Skytango and Hexafly – have been chosen from 58 early-stage businesses to persuade a panel of judges of the need for their particular product or service.

WeSavvy is a cloud-based digital insurance platform developed by Hesus Inoma and Ciara O’Grady that helps people get cheaper health cover by accessing additional data from apps and wearables on physical activities such as running and cycling.

Skytango, a company founded by Emmy Award-winning producers Steven Flynn and Susan Talbot, offers a library of aerial drone footage that can be accessed by video content creators.

The four companies will be pitching to the judges at the FutureScope event with the eventual winner then going on to showcase their idea to all attendees.

FutureScope, which promotes collaboration between entrepreneurs and large enterprises, is taking place at the Convention Centre on Wednesday, May 10th.