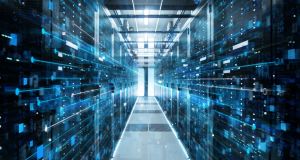 Snowflake has attracted investors with a fast-growing base of customers for its data warehousing product. Photograph: iStock

Snowflake raised the largest initial public offering ever for a US software company, in the latest sign of Wall Street’s huge demand for cloud computing service businesses.

Investors agreed to purchase 28 million shares of Snowflake stock valued at $120 (€101) apiece, said people briefed on the offering, raising about $3.4 billion in proceeds for the cloud software company. That price would give the company a market capitalisation of more than $33 billion, based on the number of shares outstanding.

Snowflake’s share price exceeded the company’s targeted range of $100 to $110, which itself was increased by more than a quarter earlier this week. The company’s market value is more than two-and-a-half times the $12.4 billion valuation achieved in its most recent fundraising round in February. It declined to comment on the pricing.

The offering is the biggest of the year and the largest in the US since Uber’s $8.1 billion flotation in May last year, according to Refinitiv, the data provider. VMware, the cloud computing company majority owned by Dell, previously completed the largest software IPO in 2007.

Snowflake has attracted investors with a fast-growing base of customers for its data warehousing product, which allows users to analyse data across multiple remote storage providers, such as Amazon Web Services.

The company’s revenue grew 121 per cent in the second quarter from the same period last year, and it boasts high “net retention” numbers, which measures customer loyalty.

Like many tech start-ups, Snowflake has burnt through cash to acquire market share, recording net losses of $348.5 million on revenues of $264.7 million in its most recent fiscal year.

The IPO gained a boost last week after Warren Buffett’s Berkshire Hathaway and Salesforce agreed to each purchase $250 million in stock alongside the flotation. Berkshire purchased an additional $320 million from Bob Muglia, the company’s former chief executive.

The venture capital group Sutter Hill Ventures is set to reap the largest rewards from the company’s listing, owning more than 20 per cent of its shares before the offering.

Snowflake’s listing is further evidence of the surging demand for tech companies benefiting from the shift to remote working. The BVP Nasdaq Emerging Cloud index, which tracks cloud software companies, has gained almost 59 per cent this year, more than doubling the returns of the broader tech-heavy Nasdaq index.

Snowflake’s flotation also comes during a busy week for IPOs, with a dozen companies prepared to join the US stock market.

Unity, a video game software company, could raise more than $1 billion in an offering later this week, while Sumo Logic, another data platform, and JFrog, an Israeli software development company, are also planning listings.

The recent activity has pushed the amount raised in 2020 to the highest levels since 2014, on a year-to-date basis, according to Refinitiv. In that year Alibaba’s $25 billion flotation set the record for the world’s largest.