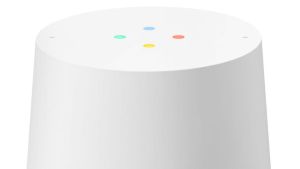 Google Home: It looks nice as a full-size speaker and doesn’t do too badly in the sound stakes.

Ask Google Home “What’s the craic?” Go on. You should get one of three answers, all of which make it clear that the Google Assistant does in fact understand what craic is. It’s 90 apparently.

Unless you are the Google Home device in my home, which gives you the literal definition of “crack”. My three year old has been bellowing “What’s the craic?” at Google Home since she heard me have a conversation with the smart speaker. And every time, the Google Assistant tells her what a crack is.

It’s safe to say that, by now, she understands. Google Assistant, on the other hand, doesn’t. At least until it updates.

Welcome to living with a smart speaker.

They essentially do the same thing: control your smart home devices, give you information when you need it, and tell bad jokes. But Google Home has a bit of local flavour to it to match Alexa’s banter. Or at least, it should do. As I already mentioned , mine has yet to play ball on the whole “local phrases” side of things. plus it occasionally breaks into an Indian accent out of nowhere, so its location settings may be a bit screwy.

But that’s an aside. You don’t buy a Google Home to keep you entertained by agreeing there’s a grand stretch in the evening. You buy it because you either want to make your life easier or you like shiny new gadgets.

So what does Google Home have going for it? Physically, it looks nice. Google Home is essentially the Echo of the group – a full-size speaker and one that doesn’t do too badly in the sound stakes. The bottom half of the device is the speaker; the top has a touch-sensitive panel for turning off alarms, controlling volume and so on. LED indicators also show up here, when Google Home is listening, for example. A mute button on the back disables the microphone, if you feel the need for a bit of privacy.

On the inside, the brains of the Google Home is essentially Google’s technology. The Google Assistant takes your requests and politely supplies the information, whether it is weather, news or your calendar for the day.

For the most part, it works. Occasionally, she will tell you that she can’t help with that, but is learning all the time. At times, it sounds vaguely like a threat, something we’ll regret when AI finally takes over and our robot overlords are using our previous requests against us.

But for now, the Google Assistant is pleasant, if slightly anonymous. She doesn’t have a memorable name like Amazon’s Alexa, so barking “Hey Google” before every command feels a bit impersonal. The Assistant understands most of the commands though. I didn’t have to repeat myself endless times, which is a bonus.

The device will connect to some – not all – of your smart home devices. Nest is, naturally, on there, as is Wemo, Philips Hue, TP Link and Hive. There are some missing, such as Dyson, that Amazon has on its platform, but it broadly covers its bases. Once the devices are connected, you can control your lights and heating with a few voice commands.

Music is covered by YouTube, Play Music and Spotify. If you have an active music service linked to your Google account, you can instruct Google to play background music when you feel it’s a little too quiet.

Voice match is an interesting one. If you are willing to give Google samples of your voice, you can attach it to your calendar and account. That means that if there are several people using the same smart speaker to access their calendar or daily schedule, Google Assistant will recognise up to six different people and give them the relevant information. It can be an issue if you have a similar voice to someone else in the home though.

But if they essentially do the same thing, why choose Google Home over Amazon Echo? Ultimately, personal preference. Maybe you prefer the look of the Amazon Echo over the Google Home. Or perhaps it is the integration with smart home services that grabs you.

The voice recognition is accurate, and the speaker itself is great on the audio front.

There are some services missing on the smart home front, and if you have any Amazon accounts for audio books, it’s not as seamless to pair up your account.

Using it as an alarm clock? It feels particularly satisfying to slap the top of it to silence the alarm at 5.30am.

Android user? Not bought into the Echo system yet? Then Google Home may be for you.