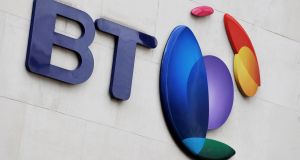 The results cap a week of turbulence for BT. Photograph: PA Wire

BT reported a sharp drop in third-quarter profit, as an accounting scandal in Italy forced a write-down, muting gains in the company’s consumer and mobile businesses.

Profit fell by 53 per cent to £374 million (€440 million), BT said on Friday in a statement. That included a £245 million provision to lower the value of the Italian business.

This week, the former UK telecommunications monopoly disclosed years of irregularities in Italy, and lowered its profit outlook as UK government clients and international corporate clients cut back on spending. Underlying revenue fell by 1.5 per cent.

The results cap a week of turbulence for BT and follow the biggest blow to the reputation of chief executive Gavin Patterson since he took the helm in 2013.

Mr Patterson has focused on transforming a company long dependent on bulky government contracts into a consistent consumer-focused brand, with the acquisition of EE and investments in sports television content. He is also facing a ballooning pension deficit, a regulatory battle and political pressure to invest more in fibre.

“The situation in Italy is very serious but we mustn’t lose sight of the fact that BT remains in good health overall,” Mr Patterson said on a call with journalists.

Mr Patterson said the problems in Italy were under control and limited to a small number of people, and that the company was working with authorities.

The company suspended its two top executives at the unit in September, and they have since left the company. Bloomberg News reported on Thursday that Andrea Giovanni Bono, the head of BT’s businesses in Switzerland, the Nordics, central and eastern Europe and Russia, will take over the Italy role on February 1st.

“It was a very sophisticated manipulation of the profitability of the business,” Mr Patterson said. “False invoices, off-balance sheet loans, these types of things, and it turned out to be bigger than we thought.”

The managers in Italy had effectively lied to auditors, he said. “It can be very challenging to find out unless you’ve got forensic accountants and that’s what we’ve done in the last quarter. We’ve really got underneath this issue, we’ve scaled it, we’ve sized it and now we’ve acted.”

In the quarter that ended on December 31st, BT reported a 32 per cent increase in revenue to £6.13 billion, aided by the acquisition of EE a year ago.

Mr Patterson had guided toward a “mixed bag” of financial results on Tuesday, pointing to solid performance in the consumer business, mobile unit EE and network division Openreach.

On Friday, he highlighted growth in those businesses and improvements in customer service.

The company said it had added 276,000 new mobile customers paying monthly. It also had record demand for fibre broadband at Openreach with 498,000 homes signing up for faster speeds.

Among BT’s public-sector and major-business customers, revenue fell by 15 per cent. A number of large government contracts were ending, the company said; some contracts were winding down more quickly than expected, and “the current market is not providing the opportunity to replace these with profitable new business”.

Moody’s on Thursday underscored the company’s challenges, signalling a possible cut to the rating by lowering its outlook on BT’s Baa1-rated debt to negative.

BT on Tuesday cited “inappropriate behaviour” and “improper accounting practices” going back several years in Italy, meaning a business it had said was profitable had long been losing money.

It disclosed a £530 million write-down over the accounting irregularities, more than triple a figure given in October when the company first discussed the investigation. The stock slid 21 per cent on Tuesday.

Nick Rose, the chairman of the BT board’s audit committee, has flagged internal-control issues in Italy in every annual report since May 2013.

He said it was too early to say whether BT would start a replacement process for PricewaterhouseCoopers, its accountant for decades, any earlier than the 2019 requirement.

1 ‘I’m so lucky to be in the Caribbean – a million miles from Derry Girls’
2 ‘The recovery needs to be a full-scale economic renewal’
3 Minister calls on EU to act against tobacco firms ‘undermining’ menthol ban in Ireland
4 Ryanair expects air fares to fall when flights take off again
5 Michael Smurfit: ‘I asked Trump to invite me to the White House for my 80th birthday’
Real news has value SUBSCRIBE