Shortage of digital skills an ‘emergency’ for Ireland and EU 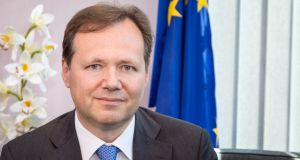 Tackling the shortage of digital skills and increasing the numbers of graduates in science and technology subjects is “emergency number one” for the European Union and for developed countries, one of the European Commission’s most senior officials has said.

Roberto Viola, director general of DG Connect, the directorate responsible for the Digital Single Market, was speaking in Dublin on Wednesday. Speaking to The Irish Times ahead of an address to the Institute of International and European Affairs, Mr Viola said the number of people with digital skills in Ireland had not increased in the past three years.

“It has been relatively stable. The Irish government is doing a lot and has clearly identified this as a priority,” he said. But he said the Government and the commission had to work together closely to address the issues.

Mr Viola said the Digital Single Market (DSM) strategy adopted in May 2015 was now entering its maturity stage and there would be a review of it in the middle of next year. A number of schemes were being examined to help create skills quickly, he added. On Thursday, the commission will launch a new skills initiative to bring businesses and the traditional education infrastructure together.

“Then we will start to target specific digital skills schemes to make sure young people have an opportunity to experience what it means to work in a hi-tech company while they are studying,” Mr Viola said.

The opportunities were “huge”, with a million job vacancies in ICT unfilled in the EU.

Minister of State for European Affairs, EU Digital Single Market and Data Protection Dara Murphy, who was meeting Mr Viola, said he would stress that, in the wake of Brexit it was “now more important than ever that Europe presses ahead with ambition in the digital space”.

“If Ireland and Europe are to maximise the potential of digital for society and the economy, we must keep pace with global developments. This means ensuring we have the right framework in place to encourage innovation; that we have a digital environment that users can trust and feel empowered in; and that we have the right skills for the digital age.”