‘Serial’ is the fastest downloaded podcast in iTunes history 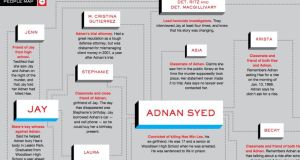 Serial’s map of the people involved in the Adnan Syed case, which has been brought to life by Sarah Koenig and the ‘This American Life’ team.

It started out quietly: just another podcast from the makers of This American Life. Now with over five million downloads in the space of a few months Serial is the fastest downloaded podcast in iTunes history. Its popularity is probably down to the public’s interest in death, murder and intrigue but the highly personal approach and presentation style has guaranteed cult status. Radio producer Sarah Koenig spent a year researching the case surrounding the 1999 murder of US teenager Hae Min Lee, for which her ex-boyfriend Adnan Syed was convicted on the basis of testimony from a former friend. Koenig’s interviews and analysis shed new light on old evidence, causing a stir among listeners, some of whom believe Adnan is innocent and hope this “detective work” will vindicate him. Absorbing stuff.