Canary’s design, simplicity and security is proving a hit with customers 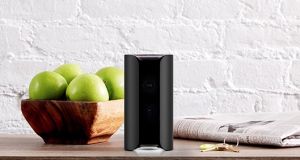 Canary security cameras keep an eye on your home, office, or pets while you’re away

When Canary first began in 2013, it was a crowdfunding campaign on Indiegogo. Its goal was to raise $100,000; the final tally was closer to $2 million. Within 15 months, the product was in 15 countries, and it’s growing all the time.

It’s not hard to see why Canary is so popular.

The security camera offers a simple way to keep an eye on your home, your office – or even your pets – while you’re away. And while there is plenty of competition, a combination of Canary’s design, simplicity and security seems to be scoring a win with consumers.

“It makes sense. It’s a very simple way to solve an age-old problem,” said Sager, who was at the Web Summit in Lisbon this week. Unlike old-school security solutions, Canary isn’t expensive, complicated or riddled with false alarms.

“What people are actually trying to do is know that their kids are safe, know their home is safe while they’re away, know that if something happened, they would know about it quickly. That’s information. It’s not security in the traditional sense, it’s the desire for information on your environment,” Sager explained.

“So we switched the model and made the physical product experience very simple. We added AI to understand what’s happening in someone’s environment. That’s what people like.”

The camera is used for everything from keeping an eye on pets, children and elderly parents, to company security.

Unlike other platforms, canary is focused solely on video. The firm is introducing new products, like the outdoor/indoor Canary Flex that can be used with batteries or plug-in power, and the mobile-connected version of the Canary.

But there are no plans to set up a whole series of interconnected products bearing the Canary name that will control everything from your home lighting to your security.

“What we believe is that the holy grail is information not automation. There are lots of people who want automation and for them we enable it,” said Sager.

Canary links in with Apple’s Homekit and has partnered with Wink, with others in the works. But its own platform is off the table.

“There’s a reason why we haven’t seen this mass adoption towards automation – because information is so much more powerful. Imagine having a history of things that happened in your environment, whether it’s home or work, that’s powerful. Being able to turn the lights on when you get home from work without flipping a switch, that’s a little less powerful,” said Sager.

“I think there are huge and world-changing applications for automation in businesses, industrial zones and others. Most of the ones in the home are for convenience or potential cost savings in energy, but they’re not life-changing.”

Some of the key things about Canary are its software and its security. The software is regularly updated to add new features and improve the product.The idea is that it will constantly get better over time.

“The quality of AI is as good as the information that you get. We knew this from day one,” he said.

“Our advantage, because we’ve grown so quickly, is that we already process through our system three times the amount of video per day that YouTube does, a tremendous amount of data from environments. The processing is done on the device so it’s local, it’s secure, it’s fast, and that enables the algorithms to get smarter and smarter.”

But Sager said Canary has chosen to roll-out such features slowly, rather than rush to get AI onto the device and get it wrong. It’s also important to keep everything secure, to make sure Canary keeps the trust of consumers.

“We believe it’s inevitable that everywhere you care about will be connected by video. It’s inevitable also that there will be AI embedded in that video, processing so you can learn about that environment,” he said.

“We want to usher that era in in a very secure way, and one that puts the user first. While AI is important and video is important, the element of trust is just as important. It’s one picture for us, it all blends together.”

Users have complete control over the device. If you want it to constantly record video, you can choose to do so, encrypted and protected.

Some people would prefer only to have the video running while they’re out of the house, shutting off as soon as they walk in the door. That can be automated, and it’s all under the user’s control.

The company’s products are put through rigorous security tests, including being sent to the Defcon hacking convention in Las Vegas to see if attendees can breach the security. It’s even more important when the recent Internet of Things botnet attacks are taken into account.

So, what now for canary? Aside from the products it has already announced, Canary is also planning a number of announcements early next year, but Sager isn’t giving anything away.

Canary has also got big plans for Europe. The company has an office in the Digital Hub in Dublin, which it opened in Europe, and operates a call centre here.

“Everyone has a choice as a company in how they look at the world, and we considered ourselves, from day one, a global company. It’s not the US and the rest of the world,” said Sager.

“Within months, 20 per cent of our business came from Europe. We want that to continue to grow, to be our second major base of operations.”

1 Player Wills site: Hines and APG to seek permission for 416 homes
2 Eir agrees to buy entire share capital of Emerald Tower
3 Developer O’Flynn calls for task force to deal with housing crisis
4 Pilita Clark: A lot of us are losing it in lockdown – but we really shouldn’t
5 Consumer spending fall may cut indirect tax revenues by up to €6.7bn
Real news has value SUBSCRIBE