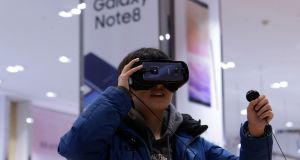 Shares in Samsung Electronics surged more than 8 per cent after the firm unveiled the stock split, and closed up 0.2 per cent. Photograph: Ahn Young-joon/AP Photo

Samsung Electronics announced on Wednesday its first stock split and said it expected demand for semiconductors to remain strong in 2018, as it posted record annual profit driven by a so-called memory chip “super-cycle”.

The tech giant’s stock split is the latest in a series of moves to bolster shareholder returns, including 5.8 trillion won (€4.3 billion) in annual dividends and 9.2 trillion won in share buybacks and cancellations in 2017.

The firm’s largesse has encouraged investors to hold shares despite concerns that the memory business may be peaking. The stock split will open the door to retail investors as well, boosting liquidity and underpinning valuations, analysts said.

While the profit was expected, the firm’s shares surged more than 8 per cent after it unveiled the stock split. They closed up 0.2 per cent.

In further good news for shareholders, Samsung eased concerns that the huge expansion in the global semiconductor business may be tapering off, saying the outlook for 2018 remained strong. – Reuters