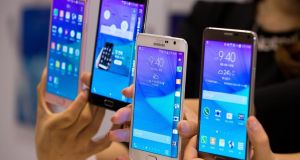 Samsung has been stung by Apple’s new iPhones, ceding global market share after the larger-screen devices captured sales in a segment pioneered by the Galaxy S lineup. (Photograph: SeongJoon Cho/Bloomberg)

Samsung Electronics is expected to release two new versions of its top-tier Galaxy smartphone next month, including a model with a display covering three sides.

Samsung has been stung by Apple’s new iPhones, ceding global market share after the larger-screen devices captured sales in a segment pioneered by the Galaxy S lineup.

Asia’s biggest technology company is using its skills in displays and chips to recapture its innovation edge and revive earnings that have slumped for three straight quarters.

“Samsung need a model with new technology to stop the iPhone juggernaut and to distinguish it from others,” said Lee Sang Hun, a Seoul-based analyst at HI Investment and Securities Co. “Although Samsung is continuing to release cheaper models globally to defend its market share, the next S phone is more important because that’s where they make money.”

The company unveiled its first device with a multiple-sided screen last year with the Galaxy Note Edge, a 5.6-inch phone with a display stretching down the right side so users can read messages and news from an angle.

One of the new Galaxy phones will have a screen that covers the front and both the left and right sides.

Samsung declined to comment on its phone specifications in an e-mail. The new Galaxy phones, developed under the “Project Zero” codename, will use metal frames supplied by BYD Electronic International Co, a subsidiary of BYD Co., the Chinese automaker partially owned by Warren Buffett’s Berkshire Hathaway Inc.