Company has its European headquarters in Ringsend 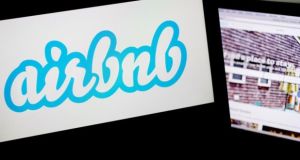 The new posts are across all functions including customer experience, human resources, finance, trust and safety and IT

Room rentals website Airbnb has announced another major expansion to its Dublin workforce on the back of increased demand for its business.

The firm, which opened its European headquarters in Dublin’s so-called Silicon Docks last year, said it planned to hire 200 new staff in the coming months.

The company also recently signed a lease for a planned 40,000 square foot office in The Warehouse building on Hanover Quay in Dublin.

The new building will be developed over the next 14 months on the site of a 19th century derelict warehouse.

In April last year, it announced it was taking on another 100 staff to add to the existing 200 in its Ringsend offices.

The latest announcement will bring its Dublin workforce to 500. The company, which plans to maintain the two Dublin offices, said it was expanding to meet the needs of its growing community of hosts and guests.

The new posts will be in the customer service, human resources, finance, trust and safety and IT divisions.

“Today’s announcement by Airbnb, one of the most exciting companies on the internet, that it is creating an extra 200 jobs in Dublin is a huge boost to this strategy and great news for Dublin,” Minister for Jobs Richard Bruton said.

IDA Ireland chief executive Martin Shanahan said: “Airbnb is one of the highest profile companies we have in the Silicon Docks area. They have hired 300 people in Dublin in less than two years, making them one of the fastest growing companies in the country.”

Aisling Hassell, head of Airbnb in Ireland, said:”It’s been almost one year since we officially opened our Dublin office and we have been really pleased with our progress so far in terms of talent and growth”.

“Our community of hosts and guests continues to thrive and Airbnb is investing further to meet its growing needs. We want to ensure we can give the very best customer experience every time someone either hosts or stays with Airbnb. Our Dublin operation is a core part of the company and we are very excited to be in a position to build on our current success”, she added.

A second jobs boost was also announced for Youth Nation, which specialises in entertainment and news for young people. It is to take on 25 new staff.