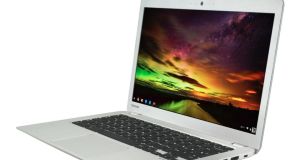 When it comes to budget notebooks, the Chromebook has generally punched above its weight. The device is designed to be used online,so that means plenty of cloud services, and that’s where it shines; but when necessary, you can break the online connection and still have a notebook that works.

There’s automatic updates, so you’re never slowed down by updating the system, and even a guest mode, so you can hand over your laptop to friends or family members without worrying about what they’ll do or find on your laptop.

First launched in 2011, the next generation, Chromebook 2, is hitting the shelves. The Toshiba Chromebook 2 comes in at a little more than the standard Chromebook at €350. But what do you get for your money?

There is 16GB of storage space on board, a 2,16GHz dual core Intel Celeron processor and Intel HD graphics built in. Toshiba has put 4GB of RAM in there too, so it’s reasonably speedy when it comes to multi-tasking and switching between apps.

The Toshiba machine has two USB ports – one USB 2.0, the other USB 3.0 – and a HDMI port to connect the Chromebook to your monitor or TV. There is also a card lot for a full-size SD card.

That means extra storage options, or at the very least, an easy way to transfer your photos from your camera if its software gets a bit funny about Chrome OS.

There are plenty of apps in the Chrome app store now, from image and video editors to productivity software and games.

In fact, if you don’t need to use any specialist software, you barely notice the lack of Windows programmes. If you are in need of anything specific – Photoshop for example – then the Chromebook isn’t really for you.

But if you need a decent laptop to get online, check email and knock together the odd document or two, the Chromebook 2 is fantastic. The Toshiba Chromebook 2 has a decent battery life too, at eight hours.

There’s always room for improvement though; Acer’s Chromebook 13 clocks in at about 10 hours, for example.

Chrome OS still doesn’t connect directly to printers by itself – you’ll need to use a laptop or desktop to set up the print services initially. However, I can count on the fingers of one hand the number of times I’ve had to print anything in the last two months, so for the average person, it’s not likely to be a regular issue.

Still, better get that printer set up just in case. That’s not specific to the Toshiba machine, though; that’s a generic Chromebook issue.

Still, it’s a low-cost machine, which means you were never going to get premium aluminium finishes. That plastic casing also makes it lighter, which is a trade off.