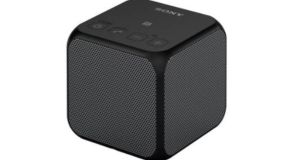 It may not be the snappiest of names, but the Sony SRS-X11 is better than it sounds. The device is a small cube speaker, one of the company’s smallest, designed for use on the go with mobile devices and music players.

For a speaker that fits in the palm of your hand, it can hold its own with speakers twice or three times its size.

The device packs 10w audio output into its small frame, with speakers on three sides, so you have a better chance of positioning it to point the audio in the right direction.

Pairing the speaker with a Bluetooth device takes only a matter of seconds, and you are good to go. If your phone supports near-field communications (NFC), even better; simply tap and go.

On one side, you have buttons for controlling power, volume and calls; the rear has a 3.5mm audio input jack, a reset button and the microUSB connection for charging the speaker’s battery. There’s also an “add” button to link up a couple of the speakers to give better sound.

A small, subtle LED light will give you an indication of power status. And the entire thing is available in a range of colours to suit your personal taste.

So is the SRS-X11 worth investing in?

Having one of these close at hand means you have an instant party sound system when you need it.

But that’s not all it’s useful for. We put one in the car as a handsfree speaker. As long as it’s positioned correctly, the sound is clear and, between the volume controls on the both the speaker and your mobile device, you can get a decent volume even in noisier conditions.

You can also link a couple of the speakers together and get them to work in tandem, either in stereo mode or in double mode, which will produce identical sound from both speakers.

Although it won’t threaten the expensive high-end speaker systems, it will certainly fill in well.

For its size, the sound it produces is more than decent, and if you invest in a second speaker, you can get some powerful results in double mode.

The not so good If you’re using this as a backup handsfree kit for calls, you have to be creative with positioning to make sure the person on the other end can hear you properly.

Despite the three-sided speaker, it can be a little tough to get the sound just right, particularly when you’re in a car and can’t – and quite rightly shouldn’t – be focusing your attention on your phone set up.

Still, it’s handy in an emergency.

Once fully charged, you get in the region of 12 hours of use from the speaker, which will cover even the most dedicated of party efforts.

But as an on-the-go sound option, it more than punches above its tiny weight.