Tech Tools: Device a good way to get into creating your own 360 footage 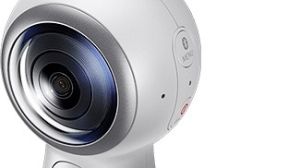 The improved 4K resolution and the adjustments to the stitching make the gear 360 a more useful device.

Samsung went big on virtual reality last year, launching a new camera alongside its S7 and S7 Edge Galaxy phones, plus an updated version of its headset. The Gear 360 was a handy little device, although not without its problems. As a reasonably priced way to get into the world of creating your own 360 content though, it served its purpose.

The newest version of the device shows a more refined Gear 360. It’s still quirky looking, but it’s taller and has been slimmed down from its first iteration.

You no longer need to attach a mini tripod to the device; it stands on its own. More importantly is the improvement to its resolution; the new Gear 360 shoots in true 4K, but more on that later. You can broadcast live footage too.

It is also available to more potential users, with Samsung deciding to branch out from its previously restrictive list of supported handsets. The new version of the camera also works with iPhones from launch, unlike its predecessor, which was for S7 and S7 Edge owners only initially. It’s only a single step, but at least it’s the right direction.

Apart from that, the camera works in a similar way. It has a big record button, a small display that shows you pertinent information such as your shooting time or remaining images. You can use that display to shoot completely independently of your phone, or use the Gear 360 manager software to control everything.

Speaking of the software, things have changed there too. The new version of the camera stitches the footage for you rather than relying on your phone’s power to do it. That solves a major issue that continually tripped up the first version of the camera. Stitching the footage was tedious to say the least. The more high quality mode that you shot in, the longer it took to stitch. On some occasions – more than I’d like – it froze mid stitch.

It’s still not quite what you’d expect from a 4K camera though. It’s worth bearing in mind that part of the issue is that the resolution, while fine for a regular camera, has to accommodate the all-round view that the Gear 360 creates. That means that while it is 4K on paper, it doesn’t necessarily look as sharp as 4K in 360 degree footage. Compare the footage side by side with the older version and you won’t notice a massive jump in quality. That’s because the sensors are now two 8.4 megapixel ones instead of 15 megapixel in the first version.

Where you will notice a big difference is in the stitch. The previous version of the camera did an okay job of stitching the footage together to create that 360 degree view, but sometimes it was less than seamless. That seems to have been improved with the second version of the product.

The bottom line is that, for the price, this is a good way to get into creating your own 360 footage. But how many people will see that as an essential addition to their video line-up is the real question.

The improved 4K resolution and the adjustments to the stitching make the gear 360 a more useful device. The automatic stitching is also an improvement, as are the tweaks to the app. An altogether less frustrating experience when transferring footage.

Do we really need 360 degree footage? And if so, do we need a separate camera, or is just a matter of time before the phone manufacturers sweep in with something more than panoramas to rival it?

The new version of the Gear 360 has a built-in battery, which means no more switching it out when things get too hot – a problem with the last version if you were shooting for extended periods of time.

Don’t set too much store by that 4K tag – stretching that resolution into a 360 environment brings the reality down a little.

Overall an easier to use version of Samsung’s camera – and one to seriously consider if you plan on dipping your toe into the world of 360 shooting.