A smoke and carbon monoxide alarm that earns its smart stripes 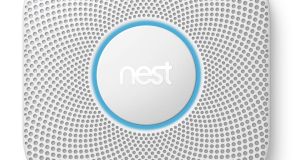 Let’s talk about smoke alarms for a minute. A few years ago when I was dragging a chair out into my hall to replace the battery in a chirping smoke alarm at 4.30am, I would have paid quite a lot of money to the first person who could come up with something that would ensure that I never had to do this again. Because we’ve all been there – and that little warning noise is probably one of the most irritating that an inanimate object can make when you are trying to get some sleep.

Yes, I know it has its purpose, and having a working smoke alarm, however annoying, is extremely important. But that morning I would gladly have knocked it off the ceiling with the mop handle if I didn’t know that doing that would make the situation worse. Fast-forward five years and things are different. Smoke alarms aren’t the first thing that spring to mind when you think about smart products, and yet Nest decided that it was going to be this very device that it would make work better for consumers. It went for the double whammy, bundling in a carbon monoxide monitor, which is another must if you have gas, oil or other solid fuel appliances.

What Nest did was create a monitor for the 21st century, one that connects to your mobile device and warns about everything from the battery getting low to smoke being detected in the area.

And it does it in actual language you understand rather than forcing you to guess exactly why it’s going postal.

The Nest Protect is now in its second iteration. The first, you might remember, had to be recalled after that handy “wave to silence” gesture was deemed a little on the dangerous side. The main fear was that the algorithm Nest Wave used could misinterpret a gesture near the device as a wave, and prevent the alarm from going off. That’s gone, but other, smarter features have replaced it. The alarm comes in two versions: battery powered or wired. The version I tested used batteries. Unlike the standard smoke alarm I’ve used in the past, it uses AA sized batteries rather than the square ones. On one hand that’s more convenient – you’re bound to have some lying around the house. However, it takes six of them, which is a bit of a pain to change.

If you’ve seen the original Nest Protect, there isn’t a huge amount of difference with its successor. Sure, it’s sleeker, but I can’t ever recall looking at my smoke alarm and wishing it had just a little more pizzazz to it. The box includes almost everything you need to attach the monitor to your ceiling, although you’ll have to provide your own screwdriver. We’ll gloss over just how long it took me to screw it to the ceiling, but at least I know the alarm is robust and can survive a little drop.

The Nest Protect takes all the guesswork out of the alarm. In fact, it takes all the work out of it completely. How many times have you burnt toast, only to have to stand flapping a tea towel under the smoke detector to make it stop beeping? The Nest Protect allows you to silence the alarm through the app on your phone, although it will override that feature if it detects too much smoke. It will warn you that it’s detecting smoke or carbon monoxide by speaking to you. You’ll also get warnings from the app, so if you’re out of the house, you’ll know there’s a problem.

The convenience comes at a price. You can pick up a smoke alarm for around €15 and a carbon monoxide monitor for around €35. The two together cost less than half cost of the Nest Protect.

Of course, that app will require a wifi connection, but if you don’t have one, or it gets interrupted, the device will still do all the things a smoke alarm should. Some Nest products can work with the Nest Protect. If you are out of the house when the alarm is triggered, you can use the Nest Cam to see what’s going on.

The Nest Protect lives up to its smart credentials. The price may be a little off-putting for some people, but for others, it’s worth the investment. In other words: take all my money.

1 Elderly parents living in property you own will save you on capital gains tax
2 How safe is it to go back to the office?
3 More than 40% of help-to-buy recipients already had deposit
4 Owner of Dundrum Town Centre to sell prized assets
5 US economy needs more support than thought, warns Fed official
Real news has value SUBSCRIBE