Review: Google Chromecast Ultra – to 4K or not to 4K? 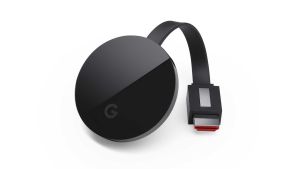 When the Google Chromecast first came out in 2013, it caused a stir. Not only could it turn your run of the mill TV into a smart TV, but it did so with minimal fuss – and minimal cost. At under $40 – later, when it launched in Ireland, €40 – it was an instant hit.

We’ve been through a few versions since then. The stick is gone, replaced by a more eye-pleasing round dongle. But it still does essentially the same thing: connects to your TV through a HDMI cable, powered by a USB connection, and allows you to stream content, games and other media to your TV through your Android tablet, phone or Chrome browser.

Then came the Chromecast Ultra. It looks very similar to its sibling: round, plugs into the HDMI port. But there are some important differences. The Chromecast Ultra is built to deal with ultra high-definition streaming, tying in with the current trend towards 4K that we are seeing in everything from our TVs to our phones and cameras. The power supply in the box has an ethernet port built in to it so you don’t have to suffer through stuttering wifi and slow connection speeds. Plus the upgraded technology inside the Ultra may help with your current set up, even if you are sticking with high-definition for now.

A few things to note though. There’s little point in splashing out on the souped up Chromecast Ultra if you don’t have a 4K screen to play your content on. It would still be nice to have but, let’s face it, you aren’t going to get the full benefit out of it. Those beefed-up insides will help with your regular HD content, but not enough alone to justify junking the old Chromecast and splashing out on a new one.

So 4K is really the pulling point here. It’s worth noting that the cost of 4K TVs is coming down as the technology becomes more prevalent and the manufacturers become ever keener to flog you a new one. You may find yourself investing in a 4K TV in the not so distant future, even if you have no intention of replacing all your content with ultra HD equivalents. On that case, having the Chromecast will open you up to Netflix in 4K and so on.

Chromecast Ultra is as easy to use as any of Google’s streaming devices that have gone before it. Even getting it connected is simple to tackle. If you are a 4K convert, you’ll see a noticeable difference in picture quality. And if you are clinging to high-definition you may see a speed boost if you are using the ethernet port. It’s still a great product from Google, and it’s still just as flexible; Chromecast doesn’t ban Apple’s devices from connecting to it, for example.

If you want to future-proof your home entertainment setup, the Chromecast is a cost-effective way to do it. It’s easy too; simply plug it into your TV and hook it up to your broadband. The built in ethernet port means you can hook your Chromecast up directly to your broadband hub. That means no wireless lag, particularly when you are streaming ultra high-definition content, which is typically a major bandwidth hog.

And because the Chromecast platform is so flexible, you can add to its functions as you go along.

At €79, the Chromecast Ultra doesn’t look quite as much of a bargain as its less swanky sibling. You have to weigh that extra cost against the benefits of having 4K on your streaming device; for some, it just won’t be worth it.

If you are going to splash out on the Chromecast Ultra – and it’s about twice the price as the regular one, don’t forget – you have to have the means to watch 4K content, and the access to ultra high-definition content. If you are on Netflix, that isn’t a problem; ditto if you are shooting your own footage, although beware of becoming the 4K bore. No one really needs to see every moment of your two-week holiday in ultra high-definition. Honestly.

If you are considering upgrading your Chromecast to something more substantial, then the Ultra is a good bet. But only if you plan on shifting to ultra high-definition at some point in the future.