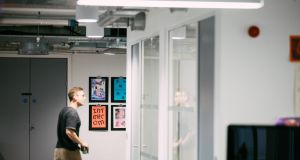 Intercom employs over 300 people in Dublin and 600 globally

Intercom, the Irish-founded software company valued at more than $1 billion (€820 million), recorded another big jump in turnover at its Dublin unit last year, with sales rising by 40 per cent to $125 million.

Revenues have more than doubled for the messaging platform over the past two years, newly filed accounts show.

The Dublin and San Francisco-headquartered company last year reduced pretax losses to $27.1 million last year after they more than doubled in 2018 on the back of a one-time share-based payment. Accumulated losses now total $151.3 million, having risen from $123.9 million over the 12-month period.

While accumulated losses are high, much of the company’s R&D work is conducted via Dublin and the figures therefore reflect a high level of investment.

Founded in Dublin in 2011 by Eoghan McCabe, Des Traynor, Ciarán Lee and David Barrett, Intercom claims more than a billion end-users and counts the likes of Facebook and Amazon as customers.

The company has developed a software platform that brings messaging products for sales, marketing and customer support together. Its products enable companies to communicate easily with customers through their own websites and apps, on social media and by email.

Its paying customer base rose by 3.1 per cent last year while the average revenue-per-account increased by 22.5 per cent.

“Notwithstanding the impact of the Covid-19 pandemic on the global economy, the company has seen current year-to-date revenue in line with fiscal year 2020 and expects to see increases in its turnover through the remainder of fiscal year 2021 and in subsequent years,” directors said in a note included with the accounts.

Intercom said it had cash and cash equivalents totalling $95.9 million at the end of September last.

A breakdown of turnover shows $59.3 million derived from North America with $40.8 million coming from Europe and $18.4 million from Asia Pacific.

The company employed 336 people locally and had staff costs of nearly $40 million. Globally, it has about 600 employees.

Mr McCabe recently moved from being chief executive to chairman of Intercom with Karen Peacock, the company’s former chief operating officer, replacing him as CEO.