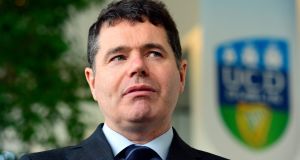 Minister for Public Expenditure Pascal Donohoe: has no plan to make it a legal requirement for members of the public to embrace the new system. Photograph: Cyril Byrne

The Government says it has no plans to make the use of new public service cards mandatory under law, although in the future many State agencies could insist on them to provide services.

The cards hold a unique identity for individuals and provide “safe and easy access” to public services.

On Thursday, the related MyGovID service was officially launched, allowing card holders online access to some of these services. About 170,000 people have already registered.

To date, 2.5 million public service cards have been issued in Ireland.

“What our citizens don’t want to be doing is . . . providing the same sets of information to multiple agencies . . . again and again,” Minister for Public Expenditure Pascal Donohoe said at Thursday’s launch, adding enthusiastically that he had himself registered.

Mr Donohoe said there was no plan to make it a legal requirement for members of the public to embrace the new system although it was clear there may be little option in certain future cases.

Minister for Social Protection Leo Varadkar likened it to people having mandatory PPS numbers and said future first-time passport applicants would be required to have a public service card.

“Because they may want the identity level to be authenticated to that [high] level and consequently that is a matter for each individual service body,” he said.

The Government believes there are other advantages to the system, including a reduction in identity theft and other fraud.

Officials were quick to underline the privacy regulations regarding any personal information held by the service. Although they did not elaborate on what specific personal data might be held, they said it would only be that approved by account holders.

“And all the data-sharing arrangements that will take place between Government agencies will of course be overseen by the Office of the Data Protection Commissioner, ” Mr Donohoe said.

EU general data protection regulations (GDPR) come into effect in May and will affect how the system is managed.

Barry Lowry, Government chief information officer, said that while current legislation already covered much of the scheme’s ambitions, further laws are under development in consultation with the office of the Attorney General which should be passed this year.

“We have taken advice and we feel very confident that it aligns Ireland extremely well with not only what the GDPR says but also the principles behind the GDPR in that to allow members of the public to basically see the data that we hold about them and to be able to change that data,” he said.

In a statement on Thursday, the Office of the Data Protection Commissioner said it was “critical” that all data protection requirements were complied with.

“In particular, full transparency with the public on how their data is being used, and the safeguards that have been put in place to protect personal data,” it said.

The Department of Public Expenditure said the role of MyGovID was to ensure the accurate and verified identification of citizens online and did not introduce any sharing of data between public service bodies not already legislated for.

“Our current legislation is very prescriptive about how departments can share data and there is often specific legislation for particular elements of sharing, for example between Revenue and the Department for Social Protection,” it said.

“Departments will not be allowed to share data that is not required in the delivery of their services.”