Nokia 3310 ‘to be rereleased’ at the end of this month

The mobile phone was famous for its indestructibility, long battery life and Snake II 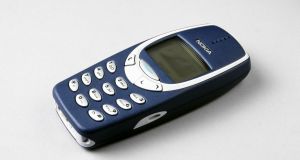 Seventeen years after it was originally launched, the Nokia 3310 is reportedly set to make a comeback.

Seventeen years after it was originally launched, the Nokia 3310 is reportedly set to make a comeback.

HMD Oy Global, a Finnish manufacturer with the exclusive rights to market the Nokia brand, has announced that a revamped version of the classic phone will be released at the end of February.

The original version was retired in 2005, at which point, according to Nokia, it had sold 126 million units, making it the the world’s best-selling phone.

According to reports, the phone will initially be available only to European and North American consumers and will cost €59, significantly less than its original price in 2000.

There have been no further details about how close the new version will be to the original, which gained a cult following due to its impressively long battery life, indestructibility and the addictive game Snake II.

The announcement of the release has had a mixed reception, with some commentators suggesting the past is best left alone.

Others have welcomed the news with enthusiasm.

And some have no need for a new version because theirs still works.

1 Lahinch Golf Club runs out of its own cash after €3m Covid-19 hit
2 Son putting elderly dad under pressure to sign over land
3 Fiona Reddan: Who’s afraid of Revolut? Not AIB and BOI it seems
4 Pfizer’s Upjohn spin-off completes merger with Mylan to form Viatris
5 How to wipe your data from your smartphone
Real news has value SUBSCRIBE