Irish plane passengers warned not to use Samsung phones 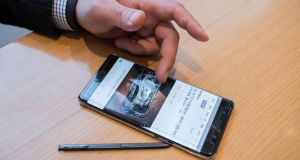 The Irish Aviation Authority (IAA) has advised passengers carrying Samsung Galaxy Note 7 smartphones to refrain from using their devices on board planes, amid ongoing safety concerns about the phones catching fire.

In a passenger advisory notice issued on Wednesday, the IAA also requested that passengers not stow the phones in any checked-in baggage.

The statement read: “In light of recent incidents and concerns raised by Samsung about its Galaxy Note 7 devices, the Irish Aviation Authority strongly advises passengers to power down and refrain from charging these devices on board aircraft.”

It said the warning applied to all Samsung Galaxy Note 7 devices, including recalled and replacement devices.

The advisory note recommended passengers visit the European Aviation Safety Agency website for further information on dangerous goods which should not be brought on planes.

Samsung confirmed this week that it would stop making the Galaxy Note 7 smartphone, less than two months after its official launch.

The company had previously warned owners to stop using their devices.

At the time, the company said it believed a small number of batteries were behind the issues, and began replacing the phones with new models.

However, some replacement models still had problems.

In one incident, a Southwest Airlines flight was evacuated after a Galaxy Note 7 began emitting smoke.

Most of the smartphones were sold in the US and Asia.

A number were shipped to Ireland to meet pre-orders. However, the company started shipping the Irish orders just ahead of the recall, so the number is understood to be very small.