iPhone’s 10th birthday: ‘They have kind of taken over people’s lives’ 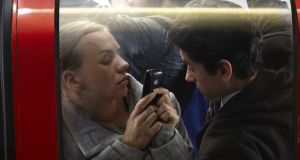 “You rarely see someone reading a book or a newspaper on the train or Luas, so I think phones have kind of taken over people’s lives”. Photograph: Chris Turner/Getty Images

“The iPhone 4 revolutionised everything,” says Niall Knowd, standing at the top of Grafton Street in Dublin. Monday marks the 10th anniversary of the announcement of the first iPhone and the young man from Wicklow reminisces about his time as a smartphone user.

He brought his first iPhone about six years ago and says, these days, he hardly even uses his current model for calling people. “I mainly use it for emails and reading articles on Facebook. I don’t really use it for contacting people. I do keep up to date with my friends who live abroad on WhatsApp groups. It’s pretty handy for that kind of stuff.”

Knowd has noticed societal changes since smartphones really took off. “I think they do affect people in a big way. If you’re on the Luas or something, everyone has their heads bent into their phones – nobody’s chatting, nobody’s interacting. I think gone are the days when people actually sat beside each other and had a conversation. You rarely see someone reading a book or a newspaper on the train or Luas, so I think phones have kind of taken over people’s lives.”

Andrea O’Donovan, from Dublin, agrees that it can be a challenge to put the phone down sometimes. “My kids would always be like, ‘Mum, you’re always on the phone!’ and certainly you could be on it all the time so you have to be disciplined not to be,” she says.

She too has had a smartphone for about six years and, for the most part, finds it very convenient. “I wouldn’t be without it,” she says. “I can’t even remember what phone I had before that. I use it for business, I use it to get my email, for communicating, whether it’s WhatsApp to go abroad or keeping in contact with friends. I use it for socialising, hiking groups, for everything really.”

For business, she says, her phone is “fantastic”. “It means you can run your business from anywhere in the world really. I can take a business call now even though I’m out doing some shopping. So I do find it very good. It makes things very flexible.”

But she adds that it can be too much of a distraction sometimes, “when you’re with people, certainly with my kids. And even just a distraction from being present, just being with yourself sometimes. When there’s a quiet moment you tend to pick up the phone and start flicking rather than just relax.”

Another young man on Grafton Street, Glen (who preferred not to give his surname), said he saw good and bad aspects in the rise of smartphones. “They have become things out of science fiction,” he says. “We live our lives on smartphones . . . our banks, our emails – social media is now the main means of communication between people. It has entirely consumed society on a fundamental level and that truly scares me.

“The ability to have access to information constantly is fantastic but at the same time we are flooded with fake news and utter lies that are perpetuated on social media that people just buy into. It is both a tool for false information and actual information that people have infinite access to.”

1 Direct sea routes to Europe offer certainty in choppy Brexit waters
2 Admission of mistake in Oxford vaccine dose raises doubts over reliability
3 There was no vaccine for Anglo: Why the last crisis was different
4 ‘I don’t need to do any of this. . .I don’t actually need to work.’
5 Promontoria barred from pursuing doctor over Ulster Bank loan
Real news has value SUBSCRIBE