Obama and others lose millions of followers in Twitter purge 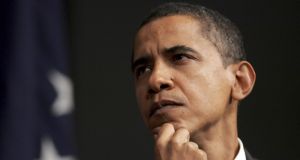 Former US president Barack Obama lost about 3 million Twitter followers in one day.

Many celebrities, politicians and social media influencers found their Twitter followings knocked down a few digits Thursday as the company slashed tens of millions of suspicious accounts from users’ followers.

For example, actor Ashton Kutcher, an active member since the company’s early days who led many other celebrities to embrace the platform, lost more than 1 million of his followers. On Wednesday afternoon, he had 19.1 million. By Thursday evening, that was down to 18 million, a drop of nearly 6 per cent.

Oprah Winfrey, who sent her inaugural tweet in 2009, lost about 1.4 million followers between Wednesday and Thursday evening. Ellen DeGeneres lost 2 million, leaving her at 76.1 million followers.

Aly Pavela, a Twitter spokeswoman, said the work of locking and eliminating accounts suspected to be fake will continue over the coming days. The company is taking action to restore trust in its platform.

Many users have inflated their followers with automated or fake accounts, buying the appearance of social influence to bolster their political activism, business endeavours or entertainment careers.

When the work is done, Twitter expects it will have reduced the total follower count on the platform by about 6 per cent, a substantial drop.

US president Donald Trump, who has used Twitter as a way to speak directly to both loyal voters and critics, lost about 340,000 followers in the Twitter purge, knocked down from 53.4 million on Wednesday to 53 million.

His predecessor, Barack Obama, took a much bigger hit, losing 3 million followers in about one day. He started with many more, dropping from 104 million Wednesday to 101 million Thursday.

The social media company itself was not spared. Twitter’s main account lost about 12 per cent of its total followers (about 7.7 million) from Wednesday to Thursday. Twitter CEO Jack Dorsey lost about 230,000 followers between Wednesday and Thursday evening.

The main account of the New York Times dropped by nearly 732,000 followers, starting at about 42.3 million Wednesday and hitting 41.6 million Thursday evening. But even more typical users saw losses in the hundreds or thousands.

Many journalists with robust Twitter pages saw their followings reduced, although some took it in stride.

Twitter’s move could also be felt in high government offices around the world. Paul Kagame, president of Rwanda, lost about one-third of his Twitter followers in one day.

On Wednesday, Kagame, who has been Rwanda’s top leader for nearly two decades, had about 1.8 million followers. On Thursday evening, that number dropped to 1.2 million.

Even Pope Francis shed 100,000 from his digital flock. He has 17 million remaining. Ari Fleischer, a White House press secretary under President George W Bush, noticed his shrinking following on his own. “If you are a fake person following me,” he joked, “please raise your hand.”

An investigation in January found that one small company in Florida sold fake followers and other social media engagement to hundreds of thousands of users around the world, including politicians, models, actors and authors.

The revelations prompted calls in Congress for intervention by the Federal Trade Commission and investigations in at least two states.

In the aftermath of this week’s follower purge, people who have built their celebrity on social media platforms took a hit as well. Kim Kardashian West lost about 3 per cent of her Twitter following, dropping down to about 58.5 million as of Thursday evening.

Justin Bieber had been stripped of about 3 million followers, while Ariana Grande lost about 932,000.

Some celebrities saw more than just a meagre cut. Kathy Ireland, the onetime swimsuit model who today presides over a half-billion-dollar licensing empire, lost a whopping 77 per cent of her followers between Wednesday and Thursday evening. – New York Times Service

1 State’s biggest landlord records 30% rise in rental income
2 Irish tourism must also help itself to survive the pandemic
3 What will the office market look like after the great remote working experiment?
4 ‘Saudi Arabia is where the opportunities will happen in future’
5 Facebook agrees Irish wind farm deal with Brookfield
Real news has value SUBSCRIBE