O’Brien ‘entitled’ to be defendant in licence case, judge told 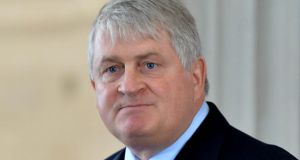 Denis O’Brien wants to be joined as a defendant in a multimillion-euro legal action being taken against the State over the issuing of phone licence in 1995/1996. Photograph: David Sleator

Businessman Denis O’Brien is entitled to an opportunity to rebut allegations that he was involved in a conspiracy of corruption in the awarding of the State’s second mobile phone licence, the High Court has been told.

Mr O’Brien wants to be joined as a defendant in a multimillion-euro legal action being taken against the State over the issuing of the licence in 1995/1996.

Persona Digital Telephony, a consortium that lost out to Mr O’Brien’s Esat Digifone, has sued for damages, including exemplary damages, on grounds alleging the licence was wrongfully awarded as a result of deceit, dishonesty and misfeasance in public office.

Mr O’Brien wants to be a defendant alongside the Department of Public Enterprise and the Attorney General, so he can fully refute and defend the himself against allegations made by Persona, his counsel Jim O’Callaghan SC said.

Mr O’Brien has already been joined as a third party to the case, along with Michael Lowry, who was Fine Gael Minister for Communications when the licence was issued. Mr Lowry is now an independent TD.

Persona says Mr O’Brien has not shown any need to join him as a defendant so as to enable the court to effectively and completely adjudicate on the action.

Opening the joinder application yesterday, Mr O’Callaghan said Mr O’Brien, as a third party, is at a significant disadvantage in relation to defending the allegation of bribery in the licensing process.

There were several exceptional circumstances justifying joining Mr O’Brien as a defendant, counsel said. If the Persona case proceeded with him as a third party, there would be nobody before the court who was either obliged to, or likely to, rebut the allegation that money was paid by Mr O’Brien to Mr Lowry.

Mr O’Brien’s proprietary or pecuniary rights may be directly affected, legally or financially, because of the allegation, he added. It would be “grossly unfair” if Mr O’Brien were not allowed defend such grave allegations of wrongdoing.

Mr O’Brien has an intimate knowledge of the Esat licence application and is best placed to rebut allegations the process was compromised or unfair, it was also argued.

In an affidavit, Mr O’Brien’s solicitor Paul Meagher said it was essential his client have a right to defend himself.