Number of female-founded Irish tech firms on the rise 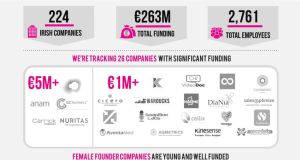 Female-founded companies are no slouches when it comes to funding with 43 per cent having so far secured investment with some firms such as Anam, Nuritas and Carrick Therapeutics, raising at least €5 million each.

Collectively, female-founded companies have raised €263 million in investment with an average funding size of €1.1 million.

According to the figures, almost two-thirds of female-founded start-ups are less than five years, suggesting that the introduction of a number of initiatives to boost the number of women working in tech, is paying dividends.

In 2017, a number of new women-led start-ups have been founded including Zendfast, Khonsu Therapeutics, Piprate, Sex Positive and Mingo.

This is the first time that figures have been compiled on the number of female-founded companies in Ireland. Niamh Bushnell, the former Dublin commissioner for start-ups who heads up TechIreland, said the organisation also intends to track leadership teams at a future date.

While there has been a significant increase in companies established in recent years by women in Ireland, the percentage of female-founded start-ups remains relatively low. In fact, such firms represent only 15 per cent of the 1,460 companies currently tracked by TechIreland.

Nonetheless, the statistics show female-founded companies are increasingly represented across all areas of technology, rather than restricted to what have traditionally been seen as “softer” segments.

According to the figures, some 23 per cent of women-led start-ups are working on enterprise solutions with a further 22 per cent in the health/medical area. In addition, 12 per cent are focused on the consumer/ecommerce segment with 14 per cent covering entertainments/sports.

Approximately 6 per cent of female-founded firms are working on artificial intelligence (AI) with a further 5 per cent in the Internet of Things (IoT) space.

Santina Doherty, chief executive and co-founder of Dublin-based start-up Unravel Analytics, welcomed the new figures. However, she described the number of female-led companies operating in segments such as machine learning as “a drop in the ocean”.

“While there is great support for female founders now and stronger encouragement for women in technology from school and all the way up, it is quite recent. It will take a long time for us to see a real balance to the benefit of industry,” she said.

Deirdre Ni Luasaigh, chief executive of CultureArk, a Sherkin Island-based digital archiving company, said she didn’t find being a female founder problematic. However, she added that there is still an underrepresentation of women on conference panels in Ireland.

“Supports for start-ups in Ireland are fantastic whether you are male or female and I think generally that most of us are careful about wanting to be perceived as business people who happen to be women rather than the other way round,” said Ms Ni Luasaigh.

“But the TechIreland stats are to be welcomed, particularly for highlighting the number of female-founded companies working outside more lightweight sectors,” she added.

1 How safe is it to go back to the office?
2 Owner of Dundrum Town Centre to sell prized assets
3 Elderly parents living in property you own will save you on capital gains tax
4 Most workers now expect choice to work from home part-time
5 Construction workers among first PTSB borrowers off payment breaks
Real news has value SUBSCRIBE