Nokia can trace its roots to a pulp mill in Finland 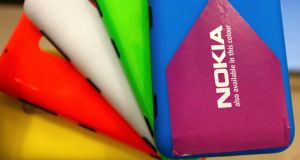 We track the mobile phone giant’s rise around the world and subsequent fall.

1871: The Nokia name is inspired by the Nokianvirta river where Idestam opens a second mill.

1981: Launch of the Nordic Mobile Telephone service, the world’s first international cellular network, and the first to allow international roaming.

1984: It launches the Mobira Talkman portable car phone – a chunky piece of kit but a start.

1987: Nokia introduces the Mobira Cityman, the first handheld mobile phone. It weighs 800g and comes with a price tag of 24,000 Finnish Marks. Soviet leader Mikhail Gorbachev is pictured using one to make a call from Helsinki to his communications minister in Moscow.

1998: Nokia becomes the world leader in the mobile phone market.

1999: It launches the Nokia 7110, a phone capable of rudimentary web-based functions, including email. It accesses the internet using wireless application protocol (WAP).

2000: The company does a deal with music publisher EMI, enabling users to choose their favourite tunes as their ringtones.

2001: Nokia launches its first phone with a built-in camera, the Nokia 7650. But a profit warning, blamed on a slowdown in the mobile market, stuns investors. It announces plans to cut 1,000 jobs, but things start to look up by the end of the year.

2002: Nokia launches a video capture phone, the Nokia 3650. It also launches its first 3G phone, the Nokia 6650. With 3G, phones can be used to browse the web, download music, watch TV on the move, and more.
2004: The company reveals that although it is still the market leader, it is losing share to its rivals, with its 35 per cent share falling short of its target of 40 per cent as it falls behind with its new product range.

2007: Nokia is forced into one of the world’s largest product recalls after it admits the batteries in 46 million phones could be faulty. Meanwhile, a longer-term problem emerges: Apple launches the iPhone.

2008: The company reports a 30 per cent fall in third-quarter profits. Its smartphone sales fall 3.1 per cent, while sales of Apple iPhones grow by 327.5 per cent.
2009: Nokia announces plans to cut 1,700 jobs worldwide as the recession hits mobile phone sales. Nokia admits it was slow to react to the rise of new devices such as the iPhone and plans to fight back. But it is too late to avoid the first loss in more than a decade.

2010: Competitors’ devices , such as the iPhone and
Android-based handsets, are posing a serious challenge to Nokia’s future. Nokia appoints former Microsoft man Stephen Elop as president and chief executive. Nokia cuts another 1,800 jobs despite a rise in profits.

2011: Elop tells staff: “We are standing on a burning platform.” Days later he announces a strategic partnership with Microsoft to compete with Apple and Google’s Android platform. Nokia cuts another 4,000 jobs worldwide from its 65,000- strong workforce. Elop denies Nokia is in talks about a takeover by Microsoft. Nokia is overtaken by Samsung and Apple in the smartphone sector as profits and sales dwindle. Nokia launches new smartphones.

2012: The group cuts 4,000 jobs and moves smartphone manufacturing to Asia. Shares fall following a profit warning and it slumps to a €1.3 billion loss. Analysts predict a possible takeover by Microsoft as it cuts 10,000 more jobs and announces its last factory in Finland will close.

2013: The company returns to profit after 18 months of losses. Microsoft buys Nokia’s handset business for €5.44 billion.