Nine charged in US over $30m hacking scheme 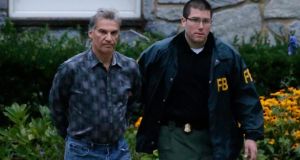 Vitaly Korchevsky is escorted in handcuffs from his home by agents from the Federal Bureau of Investigation (FBI) in Glen Mills, Pennsylvania. Photograph: Peter Foley/Bloomberg

US prosecutors have charged nine people over their alleged roles in a hacking scheme to obtain corporate press releases before they were made public, which they said generated more than $30 million (€27.2m) of illegal trading profit.

An separate indictment made public in New Jersey charges Ivan Turchynov and Oleksandr Ieremenko, two alleged computer hackers who live in Ukraine; Pavel Dubovoy, a trader from Ukraine; and Arkadiy Dubovoy and his son Igor Dubovoy, traders from Alpharetta, Georgia.

Authorities said that starting around February 2010, hackers infiltrated the networks of press release distributors Business Wire, Marketwired and PR Newswire, and gained access to corporate news such as financial results before it became public.

According to the indictments, the news was then passed to traders who made illegal trades in stocks and options based on the stolen information, with foreign shell companies being used to share the rewards.

A press conference to discuss the charges is scheduled for 3.30pm in Newark, New Jersey. A spokeswoman for the FBI said five of the defendants have been arrested.

The US Securities and Exchange Commission brought a related civil lawsuit charging many more defendants, and alleging that the thefts resulted in more than $100 million of illegal profit. It is seeking civil penalties and asset freezes, as well as the recoupment of illegal profits.

It is also the largest known suspected case of hacking that resulted in insider trading.

None of the press release distributors or companies whose securities were traded were criminally charged. Business Wire is a unit of Warren Buffett’s Berkshire Hathaway Inc.

Until now, the commission had brought only a handful of civil cases against individual hackers.

In 2007, the agency filed a civil case against a Ukrainian trader named Oleksandr Dorozhko, accusing him of hacking into IMS Health Holdings Inc and stealing information on earnings that he used to make profitable options trades. In 2010, a federal court ordered Mr Dorozhko to pay $580,000.