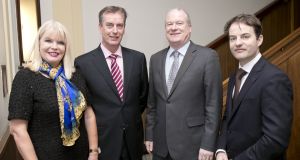 ACT Venture Capital has set up a new seed fund, the AIB Start-up Accelerator Fund 2, which plans to invest up to €1 million in 25 new companies over the next four years.

Backed by Enterprise Ireland, the fund will focus on high-growth, export-oriented firms operating in software, internet, digital media, communications and mobile sectors that are preparing for scaling.

ACT can also invest a further €7 million from its main fund into companies that are successful but need further expansion capital.

“This fund will help to sustain Ireland as one of Europe’s most active locations for seed funding and will create a strong pipeline of expansion companies and funding opportunities over the coming years,” said John Flynn, managing director of ACT Venture Capital.

“ACT is particularly keen to partner with entrepreneurs where we can exploit our international network to help them expand.”

The first incarnation of the fund, which supported 39 companies, has already seen a number of successful exits, including Trustev, Storyful, Soundwave and FeedHenry.

Enterprise Ireland’s executive director of investment and finance, Walter Hobbs, said a funding ecosystem for start-ups was critical if they were to thrive.

“As part of this mandate we recognise the value of venture capital funding to support high potential growth companies in the ICT sector,” he said.

The news was also welcomed by Minister for Jobs, Enterprise and Innovation Mary Mitchell O Connor.

1 Fianna Fáil may have just pressed the pause button on the property market
2 Who are Ireland’s 17 billionaires?
3 Saudi prince’s WhatsApp account ‘directly involved’ in Bezos hack
4 European investor acquires Harcourt Road offices for €55m
5 My father in a nursing home wants to gift me his house
Real news has value SUBSCRIBE