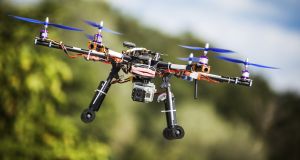 Love them or loathe them, drones are in full flight these days. Aerial photography enthusiasts have embraced them, providing a bird’s eye view of everything from the Wild Atlantic Way to weddings.

An influx of cheaper toys has seen them become a must-have for younger pilots. And last week, Pony Express Couriers said it had completed Ireland’s first authorised drone delivery, using a drone to drop emergency supplies to a boat off the Dublin shoreline.

The industry has exploded over the past couple of years. Instead of having to build devices by hand, ready-to-go drones for all purposes are now available to buy off the shelf.

No one has been better positioned to see that than Damien Doyle, managing director of the Copter Shop in Dublin. While most of us are trying to get to grips with toys or camera-bearing drones, he has seen people explore a whole other side of things: drone racing.

Doyle says the interest in drone racing has increased significantly in the past couple of years as the devices have become more and more popular.

“The drone-racing industry in Ireland is small but certainly growing. Everyone is starting to get into it,” he said. “I remember when it first started off and there were literally five or six people flying; now there are about 200.”

The sport has been getting increasing coverage in recent years. Sky Sports shows the Drone Racing League on its Sky Sports Mix channel and has invested $1 million (€940,000) in the sport. ESPN also shows the league, dragging the sport into the mainstream.

While the racing league is showcasing the top pilots in the world, there are plenty of opportunities for budding drone racers to make their mark here. Ireland now has its own Drone Racing Nationals, which pits the best racers in the country against each other. The top six pilots in the championship race qualified to go to the ERSA European Cup in Ibiza.

If you think that commanding a drone from DJI or other commercial drone manufacturer could prepare you for drone racing, you’d be wrong. Drone racing is a very different thing, especially when it comes to so-called first person view (FPV).

This is a particular type of flying, where pilots use cameras to fly drones. It’s almost like sitting in the cockpit; even more so if the pilots are using goggles instead of FPV monitors. It has been compared to playing real-life video games, especially at the higher competitive levels.

While many off-the-shelf drones have GPS and other technology built in to minimise the risk of crashing, drone racing removes that safety net.

“They are skilled pilots in what they do,” says Doyle. Crashes happen, however, and it can add up for those involved in the sport: replacing hulls, rotors and other parts are not cheap.

However, it still seems to appeal to all age groups. Representatives from the Copter Shop have spoken in Dublin schools about drones, with one presentation to about 400 children in Donnycarney concentrating on joining the dots between toy drones and education; through physics, for example.

“It was really cool watching the kids and listening to them,” says Doyle. “Amazing the amount of kids who knew so much about the drones.”

Racing isn’t Doyle’s main area of interest – he prefers the aerial photography side of things – but he says there is one area in which he has a growing interest: drones for search and rescue.

“It’s great having fun and all that, but what I’m seeing is how drones are being used to literally save lives. To me that’s just amazing,” he says. “You might not have the best pilot in the world able to go 100mph but that is what makes drones interesting.”

It is certainly a shift from drones as a potential hazard. The Irish Aviation Authority (IAA) has cracked down on drones in the past couple of years, publishing regulations in 2015 that covered the dos and don’ts of drone usage in Ireland.

Anything weighing more than 1kg has to be registered with the IAA. Generally they can’t be used in certain areas – restricted airspace, over crowds of people – and must stay within 300m of pilots.Taking off and landing from private property requires permission from landowners.

It may seem like they’re spoiling the fun, but there are reasons why the regulations are in place. Drones, when not handled correctly, can be dangerous. There have been several highly publicised incidents in recent years in which drones crash or have near misses with everything from landmark bridges to nuclear power plants.

There was the guy from New Jersey who found himself on the wrong side of the law after his drone hit the 40th floor of the Empire State Building. Not only did he ask for the drone back from building security – you have to love his optimism – he also tweeted about the incident, making it very easy to track him down.

He was a little unluckier than the person who crashed a drone into the Great Wheel in Seattle. At the last report, police were still hunting the owner.

Singer Enrique Iglesias sliced his hand open when he tried to grab a drone hovering to take photos at one of his concerts.

Closer to home, a toddler in the UK was left blind in one eye in 2015 when a family friend lost control of a drone and hit him in the eye with the propeller.

While many drones would not fall under the IAA’s regulations – they’re typically under the weight limit for registration and cannot fly out of the range that is laid down in the guidelines due to the lack of GPS – there are still health and safety considerations for racers.

Doyle says the races are often conducted in enclosed areas with permission from owners. These include basement car parks, or for the Drone Nationals, the track at Mondello. That minimises the risk to innocent parties while ensuring that drone racers can test their skills.

The biggest issue Doyle sees is that people can fall into using drones without being aware of the rules and regulations.

“No matter what the drone is, you have to stick to the rules,” says Doyle. “People need to know those rules and regulations. But it seems that people just decide to do what they want. We try to make sure we sell to the right people and it’s being used for the right reasons.”

He believes proper legislation is needed, perhaps with penalties for those who breach it. “Unfortunately it’s going to have to be when something happens,” he says. “Hopefully it never does.”

What to look for in drones

Flying time: This is a key consideration. Many drones, particularly at the lower end of the market, offer only a limited flight time, but the average is about 15 minutes on a full battery. You may want to pay more to get a back-up battery to make sure you aren’t cut short.

Speed: What do you want to use your drone for? If you plan to enter the world of drone racing, speed will be crucial. For taking aerial photography shots, it’s not as vital.

GPS: If you plan on using your drone for commercial purposes or for fun, GPS is a handy feature because if something goes wrong, you can recall the drone or have it hover until you collect it. For racing, however, GPS is not needed.

Spare parts: You may not want to think too much about it but the availability of spare parts but you should look into it. Crashing your drone is inevitable. You may as well know how much it will cost you to repair a broken rotor or hull, and more importantly, if it’s even possible.