Much to admire in Microsoft’s new Windows 10 for phones

Microsoft has a lot of ground to make up, but its new operating system might lure users to its smartphones 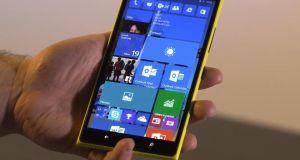 Windows 10 for phones ties in with the desktop version of the software; in fact, it’s all the same

Microsoft is upping the stakes in the smartphone war. Windows Phone 8 is about to be consigned to the dustbin; Windows 10 is the future.

At least, Microsoft hopes it is. There’s a lot of ground to make up in the mobile devices market.

When it launched Windows Phone, Microsoft was already starting behind its smartphone rivals. It’s been playing catchup ever since, trailing Android and Apple in third place.

It doesn’t have a realistic prospect of unseating Android as top operating system any time soon; Microsoft and Nokia Windows-based phones accounted for less than 7 per cent of all phones shipped last year, according to IDC figures. However, the research firm said Windows Phone would challenge Android at the lower end of the market, and that it would grow in the enterprise sector too.

Could Windows 10 be the operating system that sways users to Microsoft’s smartphones?

It’s reminiscent of Apple’s Yosemite update, which brought in Handoff to iOS devices; you can start something on your tablet and pick it up on your Windows device.

Notifications can be dealt with on your desktop and also disappear from your mobile device, so you aren’t dealing with old alerts on multiple devices. And speaking of notifications, the pull-down menu that also includes some settings has been expanded to make it a bit more useful.

There are new customisation options in Windows 10 too that, while not critical to how the software works, makes it all tie in a bit more neatly.

Instead of being stuck with a plain background, you can now, finally, set wallpaper to an image of your choice. It’s a small thing, but it helps the Windows device feel more like yours. And, like with Apple and Android, that image can be seen through your main menus. On both the customisable Start menu screen and the list of apps, the menus are translucent, meaning your personalised background shows through. That’s something that Windows 10 does on desktop too, and it’s a nice addition to the phone.

Recently installed apps are highlighted at the top of the apps list when you swipe across from the main Start screen. That’s handy when you don’t want to search down through the list of apps you’ve installed for that software you just added to your phone.

The main settings menu has been redesigned on the phone to look more like the desktop version, and if you’ve been using the preview of Windows 10 on your laptop, this will look very familiar.

If the Windows Phone you’ve been using isn’t a Lumia, you’re about to benefit from Microsoft’s purchase of the brand. Windows 10 makes the Lumia camera app, with its auto HDR and 4K recording, the standard camera app on Windows phones. And it’s been tweaked to make it faster and more useful than before.

All your photos, whether they are on the OneDrive cloud storage or stored locally on your handset, are pulled into the photos app on the mobile platform, organised into albums and synced.

Skype is also going to be more tightly integrated than before, with SMS and instant messages sitting alongside each other. That makes it easier to switch between conversations, although the number of messaging applications out there probably means this is less useful than it would have been a few years ago.

A couple of things that are included in Windows 10 for phones that we couldn’t test. The Spartan browser, the one that has Internet Explorer fearing for its future, was not part of the preview. Cortana, the Windows digital assistant, is also available in Windows 10, but in the technical preview it wasn’t available in Ireland.