Mobile-first banking takes off in Ireland with 10,000 customers for N26 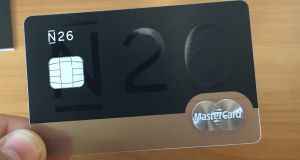 PayPal co-founder Peter Thiel is among those to have backed N26, which has raised more than $50 million to date 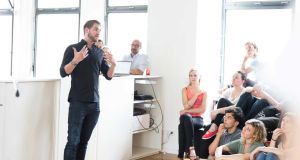 Alex Weber, N26’s head of internationalisation: We’re very happy with the adoption level of N26 Black in Ireland and the country is one of our strongest markets on a per population basis

N26, a low-cost mobile-first bank, which was awarded a full European retail banking licence last year, has gained about 10,000 customers in Ireland, of which about 10 per cent are using its new subscription-based premium current account.

The Berlin-based fintech startup, formerly known as Number 26, began offering its services to customers in Ireland in December 2015, providing consumers with a free current account accessed via a smartphone app.

After receiving a banking licence from the German regulator BaFin and the European Central Bank (ECB) last July, the company, which was previously dependent on third-party companies to offer banking services, began providing a fuller range of products in Ireland and other countries at the end of 2016.

Despite costing €5.90 a month, or €70.80 a year, the startup’s N26 Black one-year subscription premium account is proving popular with Irish customers with around 1,000 sign-ups already, according to Alex Weber, the bank’s head of internationalisation.

Mr Weber, who was speaking to The Irish Times ahead of an appearance at the Dublin Tech Summit, said Ireland was one of the first countries in which customers could upgrade to the company’s Black offering.

“We’re very happy with the adoption level of N26 Black in Ireland and the country is one of our strongest markets on a per population basis. Markets such as Ireland where you have traditional slow-moving players, relatively poor online offerings and high fees are where we find it very easy to get sign-ups,” he said.

“Generally, across our customer base, we’re finding that people are trialling our free basic account and once they’ve found it easy to use, are upgrading and making it their primary account,” he added.

For the subscription fee, N26 Black customers get a Mastercard and a comprehensive insurance package from Allianz Global Assistance Europe that includes travel, health, mobile phone or cash theft, as well as fee-free day-to-day banking services.

N26, which is building a European-wide mobile-first bank that has no physical branches, was founded by Valentin Stalf and Maximilian Tayenthal in Vienna in 2013. It currently has more than 200,000 customers across 17 European countries, the vast majority of whom are in Germany and Austria.

PayPal cofounder Peter Thiel, who made the first outside investment in Facebook in 2004, is among those to have backed the startup, which has raised more than $50 million to date.

N26, which says it is gaining about 1,000 new customers every day, is aiming to revolutionise the traditional banking sector with its easy-to-use services. The account opening process takes on average just eight minutes and is completed via a video conferencing call with its customer support team.

Mr Weber, the first employee to join the company aside from the cofounders, said that unlike bricks-and-mortar banks, N26 has been built around customer’s needs, rather than the needs of the institution.

“We looked at the pain-points that people typically experience with banking in order to make it better. So for example, opening up a bank account with us involves no paper work and takes minutes, while you can also block lost or stolen cards in real-time using our app rather than having to waste valuable time contacting a call centre,” he said.

While it initially targeted early adopters, the company is now looking beyond this to a more mainstream customer base. The recently-granted banking license permits it to expand its offerings with new savings, investment and credit products, some of which are already being rolled out in N26’s home market.