Company to shortly celebrate 35 years in the business 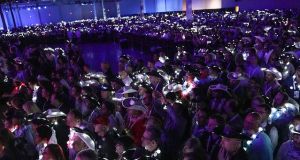 “We have a saying inside our company: pleased but not satisfied.” Michael Dell is addressing the company’s evolution over the years, from hardware company to cloud service provider and everything in between. “It’s this idea of continuous improvement. The Japanese call it kaizen.”

Dell is only days away from celebrating its anniversary. Thirty-five years ago, the company was just getting started, set up by Michael Dell with a $1,000 (€891) loan from his family to boost the fledgling business he had started from his college dorm room.

Today, Dell clocks up billions of dollars in revenue, has thousands of customers all over the world and three years ago pulled off the largest merger in the technology sector when it bought EMC In its most recent results, its fiscal year 2019, Dell Technologies’ revenue was almost $91 billion.

“We’re successful because we listen to our customers and we create capabilities that solve their current problems and hopefully their future problems. If we don’t do that we’ll go out of business. We have to constantly evolve,” Mr Dell said.

“All these transformations, it’s like a race with no finish line. If anybody ever says ‘oh we’re done with the digital transformation’ you know that person is not telling you the truth. It’s an ongoing thing. I think a big part of this is organisations have to reimagine themselves and reinvent themselves constantly, given all the new technologies.”

Many of those new technologies are where Dell is building its business. At its annual event in Las Vegas, Dell Technologies World, the company announced a series of new products and services designed to help companies ranging from small and medium sized enterprises up to larger corporates and government bodies to control and manage their tech set up, from cloud services to the devices they give their employees.

The future, it seems, is bright. But there are also responsibilities that come along with that. During his keynote, Mr Dell described the company as having “a culture of tech optimism” and said there was a responsibility on the industry to create technology that reflected humanity.

That may be a tough task, but he is somewhat matter of fact about it. “I think technology is neutral. Technology doesn’t wake up in the morning and say ‘I’m going to be bad today or good today’, it’s just there,” he says. “We are responsible to make sure technology does good things.” He also notes that regulators are on hand to help make sure the industry doesn’t screw it up.

It hasn’t been an easy couple of years for the tech industry as a whole. A series of missteps and mistakes from other companies has led to a backlash against companies using personal data, and a suspicion of artificial intelligence and its application in the future.

“I think we have to be thoughtful about this. We’re not a business that uses customer’s data or makes money from customers’ data. Customers own their own data,” he says. “We are making incredibly powerful tools. AI is becoming more and more powerful, but I am tremendously optimistic that the vast majority of uses of technology will be for very positive outcomes.”

During his keynote on the opening day of the event, he drew a comparison with fire; today, he compares it to the development of the wheel, but the message is the same. Used appropriately, technology can be an enabler, and although there is the potential for bad things to happen, the potential for good is greater.

That doesn’t mean Dell as a company plays it safe. Its founder is clear where he stands on taking chances and bringing risk into the picture - if you don’t take a risk or two, you might miss your chance.

“I feel risk is one of these words that had been demonised. To me, risk goes with innovation and success. So you have to take risk,” he says. “Inside big companies especially people talk about risk reduction, risk management, risk committee. Nobody wants a risk. But actually, if you don’t take risks you won’t innovate and be successful.”

There was an element of risk to some of the company’s more recent decisions, albeit of the calculated type. In 2013, Michael Dell took the company private, removing the focus on quarterly results and thereby taking some of the pressure off. The idea was that the company could now focus on research and development, and building products and services, rather than pleasing investors with profits.

Then came the EMC merger, a $67 billion deal that divided industry analysts. That risk paid off for Dell, as its financial results show.

That figure is still growing; last year, it hired 600 people, and according to the company’s president for Europe, the Middle East and Africa Aongus Hegarty, around 25 per cent of the company’s hires are graduates. While there are no specific plans for a headline-grabbing single investment, Dell Technologies is quietly continuing a steady rate of expansion.

And now, Dell is a public company again, with a reverse merger with VMware approved in December. It’s only a few months in but Mr Dell is confident it was the right decision.

“The public listing has allowed us more flexibility, allowed us to stay on offence and simplified the capital structure,” he says. “The rate of change in our industry is not slowing down and we have to constantly be reinventing ourselves. I certainly think about how the company started,especially coming up on its 35th birthday on May 3rd. We have to have that entrepreneurial mindset and that acceptance of risk and embracing of risk to be able to continue to stay relevant and important.”