McKennas take the hybrid book and app approach to their guides 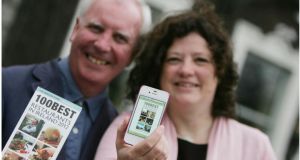 John and Sally McKenna launching their long-running Bridgestone review guides, 100 Best Restaurants in Ireland and 100 Best Places to Stay in Ireland. They have also launched apps for their guides. Photograph: Bryan O’Brien

The web and social media have not been kind to the traditional guidebook publishing industry. Facebook, tweets, TripAdvisor, specialist blogs, and expectations that publishers offer part or all of their guidebook stable online for free have hammered profits.

The casualties are numerous. Lonely Planet, which must once have seemed a great investment for the BBC when print guides boomed in the 1980s and 1990s, was sold last year to an investor at a £80 million loss. The venerable Frommer brand was sold to Google and, only nine months later, was sold back to the publisher, sans some online elements. Google also owns the popular Zagat.

According to the Economist, Frommer’s sales fell from $34 million to $18 million between 2006 and 2012, while Lonely Planet’s slid from from $25 million to $18 million. Sales for guides generally have decreased catastrophically from 2005 – considered the peak year for most guides – until now.

For the well-known Irish guide producers John and Sally McKenna, however, who have increasingly moved their own range of businesses online, the web offers as many opportunities as challenges.

The couple are especially well known for their restaurant guidebooks, for many years produced in association with Bridgestone, which has since decided to move out of food guides, says McKenna.

That meant they had to discover whether they could keep their brand going in its own right in the past two years, a venture that she says has been successful largely due to the publishing and networking possibilities of the web and mobile worlds. “We were in transition. We really felt we were at the end of something and we wanted to be at the beginning of something else.”

The McKennas began the move toward increasingly digital publishing with a website in 2009, where they began to gather content, now all under the Guides.ie banner. An initial mobile app foray was their guide to 100 Best Dublin Restaurants, a free download at the time.

Now they offer a 100 Best Restaurants in Ireland app, a free digital newsletter called Megabites, which they plan to develop further, and a video channel, which McKenna describes as “the most important thing we have started to do”. They are slowly building an archive of videos on all things foodie and developing an audience. One video was longlisted for the Fastnet Film Festival this year. More app guides are on the way.

“We did try our hand at ebooks and Kindle, but there really wasn’t much interest in it. I found it frustrating,” she says. “We’ve been watching other guide publishers like Lonely Planet, who sell chapters of guides as ebooks now. We might try that, but it’s a bit of a dead format.”

Their latest production is Where to Eat and Stay on the Wild Atlantic Way “smart guide”, a hybrid between an app and a book that allows users to either go online, or download content to a device, as they tour the new Wild Atlantic Way route in the west. People can also engage on social media directly through the app and, for example, follow chefs from the routes’ restaurants on Twitter.

“There’s just a lot of fun you can have with digital that you can’t do with a book,” says McKenna, of the decision to opt for an app. With this guide, which can also be bought as a print book, “we’re straddling both worlds – but it’s a bit scary” as they move away from traditional publishing, she acknowledges.

They much prefer having more interactivity, hence the smart guides. “We wanted the best of both worlds and we found we were reading more in digital formats ourselves.”

The food world is very social media oriented anyway, she says, which has helped. Their biggest threat is the crowd-sourced review website TripAdvisor, she notes, but they hope to differentiate from it by provided a more filtered, nuanced and trusted set of reviews and recommendations.

The Wild Atlantic Way smart guide has been developed in association with Dublin City University under an Enterprise Ireland knowledge partnership. The School of Communications has involved student and staff research on interactive applications to the project, under the leadership of DCU associate lecturer Dónal Mulligan.

He is enthusiastic about the work experience the project brings to his master’s degree students, while also giving a business a carefully considered app at a reduced cost to commercial production.

A smart guide “brings a whole layer of functionality that’s simply not available in a print book”, he says. People now expect to be able to check information online, reserve rooms, check menus, GPS-locate a business and more – “layers and layers of convenience that people are expecting and can be given in an app. And apps particularly suit the kind of niche market the McKennas are operating in.”

There will always be a place for the attractive, beautifully photographed coffee table travel book, Mulligan says, but the active traveller increasingly wants interactive information that the traditional print guidebook cannot provide.

McKenna says the partnership has been very fruitful – Mulligan also helped produce the Best Restaurants guide – and notes that she sees the production cost of an app as a huge price upside to the old print book.

“Our eyes water when we get our print bill,” she says. “Print is so expensive. But again, books sell, so it can be recouped. The app is far less expensive.” For now, though, they will stick with the hybrid book and app approach.

The app, she hopes, will help expand their reach into markets such as Europe and the US, where the cost of shipping books is a deterrent for a small publisher.

“I find the whole thing is really, really exciting. That’s not to say it isn’t scary and not hard, but I’m glad to live at this time of publishing. It’s just a very interesting time.”