MCD dials up sponsorship with Three 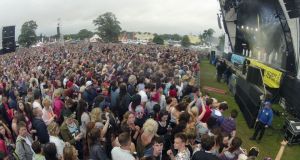 Three, the mobile phone company that last year swallowed up bigger rival O2, really does take its name seriously when it comes to sponsorships. It is the magic number, after all.

Three has just inked a deal with MCD, the concert promoter founded by Denis Desmond, and EP Republic to become an official sponsor to – you’ve guessed it – three separate music events: The Electric Picnic, the Longitude Festival and the New Year’s Eve festival.

The Picnic and Longitude are both three-day events, so more brand kudos there. And 2015 will actually be the mobile company’s third year (this is getting ridiculous) sponsoring MCD’s New Year’s Eve gig.

The fly in the ointment? The sponsorship with the concert promoters is a four-year contract. Ah well . . .

The next batch of of Electric Picnic tickets are due to come on sale in coming weeks. Elaine Carey, the chief commercial officer of Three, says the mobile company’s customers will get a chance to buy tickets for the event before anybody else.

The Picnic sold out pretty quickly last year, much to the chagrin of plenty of would-be welly-wielding gig-goers.

“We will have a big presence onsite at each event,” said Carey. Hopefully they’ll bring a few chargers with them.

“We are conscious that Three would have previously been viewed by some as a youth-focused brand,” she said. “But since the O2 acquisition, we are now mass market. We think music festivals can give us that mass and diverse appeal, although we won’t be forgetting our roots.”