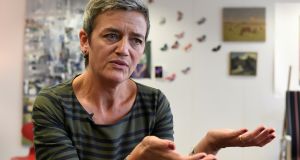 Margrethe Vestager does have an official Facebook page, an online diary of her life as the EU’s competition commissioner, one of the biggest jobs in Brussels. Photograph: John Thys/AFP/Getty Images

Margrethe Vestager, the world’s most powerful regulator of tech companies, does not have a personal Facebook account. She decided to stay off the site, because parents, she thinks, should not be friends with their children on Facebook. “Because I am Danish,” she explains. “I don’t think you should follow too closely what your children are doing on Facebook because they might want to have some free space where no mother is hovering over their shoulder.”

Vestager does have an official Facebook page, an online diary of her life as the EU’s competition commissioner, one of the biggest jobs in Brussels. The page details work done – her recent announcement that the EU had settled a seven-year dispute with Gazprom, a record €2.4 billion fine on Google in 2017.

But there are also snaps from everyday life (reposted by staff from her Twitter account) – the wide blue skies of Jutland or traditional homemade New Year cake (kransekage) – a tower of marzipan decorated with EU and Danish flags that she baked for a staff party.

Some European lawmakers would like this non-Facebook user to investigate the mighty social network, which is used by a quarter of the world’s population. When Mark Zuckerberg donned a suit and tie to meet MEPs last month, he was asked whether he had created a digital monster. Facebook has “too much power” was the blunt verdict of the German centre-right MEP Manfred Weber, a close ally of Angela Merkel.

Over at commission headquarters, Vestager is not rushing to judgment on whether Facebook has too much power. “It is difficult to answer in general because you would need first to have a theory of harm,” she says in an interview. “It is not a problem to be big in Europe. You are more than welcome to be successful. Sometimes people seem to think: ‘This is Europe, so probably they have some angry ideas about not being successful,’” she says, possibly in answer to US critics, who have accused Brussels of going after Silicon Valley’s biggest success stories.

“A lot of people are using Facebook but the legal analysis is another thing,” she says, adding that an inquiry could only begin if the commission had substantial complaints or reasons to suspect abuse of a dominant position in the market.

Other regulators, however, are taking a close look. Germany’s competition regulator concluded last year that Facebook abused its market dominance by gathering data on people without their consent. French authorities have said they may open investigations into Facebook and Google after an inquiry found that the two companies dominate the online advertising market.

Facebook, which told the European parliament there were many alternatives to its services, has described the German competition office’s report as inaccurate.

Jan Philipp Albrecht, a German Green MEP and one of the EU’s best-known privacy campaigners, would like to see Brussels open investigations. “Margrethe Vestager had a very good approach on getting on to market discrimination and unfair practices on the digital market. There is far too little on the challenges we are facing right now.”

On his list of burning issues: Facebook’s use of non-Facebook users’ data, questions over Facebook’s compliance with the EU’s General Data Protection Regulation, and the “illegal cross-use of data between Facebook and WhatsApp”.

Facebook took over the messaging service in 2014 and promised antitrust regulators it would not match user accounts on the two platforms. However, it did exactly that and was fined €110 million. “Everybody knew [THIS]would happen,” laments Albrecht, who thinks EU antitrust staff missed problems that would be thrown up by the merger.

Vestager says the commission is following closely what the German cartel office is doing, “though there are differences between German law and European law and you cannot just copy-paste what is done in a German context”.

Others would like EU antitrust authorities to think about the dangers that digital giants pose to democracy. “There is a competition problem in the dissemination of fake news,” says Agustin Reyna, the chief competition adviser at the European Consumer Organisation. Social media platforms “don’t have the economic incentive to stop fake news” he says because revenues depend on clicks and shares.

Noting that the commission’s competition office has no inquiry into fake news, Vestager says she is concerned about the impact of social media. “One of my main worries is that we deactivate democracy because we retreat to our own private bubble and our private feed of things that we would like to hear accompanied by cat videos. If you don’t even agree on the world you live in it becomes very, very tricky to work out what problems you want to solve.”

It is a theme she has spoken of at tech conferences around Europe, making her one of the few EU commissioners who is a name outside Brussels.

Her profile, but above all her tough approach to Apple and Google, is rumoured to have made her Emmanuel Macron’s preferred candidate to become the next European commission president.

Vestager, who has described Brexit as “unbelievably sad”, would be a more diplomatic figure than the current incumbent, Jean-Claude Juncker, known for his off-the-cuff jokes and unvarnished remarks. During Italy’s latest political crisis, Juncker infuriated Italians by saying the country needed “less corruption [MORE]seriousness”. Speaking before his remarks, Vestager played it safe: “It is not for us to interfere at all.”

But the obstacles to the top role in the EU are formidable as the job is usually sewn up by the larger political groups on the left and right.

For now, she will only declare that she would like another term as competition commissioner. If she had a second term “then we could get things done”, she says, sketching out a sweeping agenda. “Our economies are digitalising completely, everything: democracy, social relationships, agriculture, transport, health, public sector”.

The task, she says, is “to figure out how to you make sure you have fair competition and that democracy still serves consumers when production and business models change as much as they will.” – Guardian News and Media 2018

1 Coronavirus: Journal Media to cut pay by up to 20 per cent
2 Coronavirus: Notion of a rapid economic recovery is at best wishful thinking
3 Nice to see you: Which is the best video calling option around?
4 Frontline bank workers to get pay top-ups during Covid-19 crisis
5 Will the coronavirus crisis rehabilitate the world’s banks?
Real news has value SUBSCRIBE