The US has made it illegal to use bots to evade secure ticketing. Will that stop the practice? 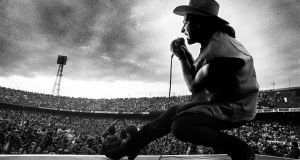 Bono performing onstage during the original Joshua Tree tour in 1987. Many fans have been outpriced in the race for tickets to the 30th anniversary tour. Photograph: Lex van Rossen/MAI/Redferns

Forget the long queues and street corner ticket touts: when it comes to major concerts or events, it’s increasingly about the bots.

The use of bots buying up large volumes of tickets had created a real problem for frustrated fans getting pipped at the post.

After American fans and the industry became frustrated by the situation, the US in December passed a law making it illegal to use bots to get past secure ticket purchases .

Ticketmaster Ireland’s managing director, Keith English, recognises the issue facing consumers here. “If there is enough heat and enough interest, then you are bound to attract the activity of bots”.

In 2016, Ticketmaster blocked six billion attempts by bots to access its sights globally. “We are in a bit of an arms race with these people,” English says. “Our development team are constantly trying to come up with new ways to frustrate the activity of bots. It isn’t so much that you necessarily catch it live there and then during the action process. It’s that you are building the next generation of our sales process to keep them at bay.

“We are changing it again and again – looking at stuff where we can analyse the speed of key strokes and the movement of the mouse to see if it’s actually human rather than a piece of software. We are trying to keep ahead of them all the time.”

With bots pushing up a thriving resale market in the US, can this new legislation be enforced?

“I think the act would be unnecessary in a perfect world, where ticket prices were such that resale was not a profitable enterprise,” says Tom Merritt, host of Daily News Tech Show. “So this appears to be fighting a technological advance with a policy which generally does not work well.

“What was made illegal was circumventing limits placed on ticket buying,” Merritt adds. “This is similar to making it illegal to circumvent copyright. As we know from copyright law, making something illegal will not necessarily reduce the behaviour.”

Some critics agree, saying the law is doesn’t provide an actual solution to what is becoming a very serious problem, as most fans are priced out of the market with inflated resale charges. You don’t have to be a software developer to get in on the action when sites such TicketBots.net are selling software packages for about $1,000 (€938). It’s a hefty price to pay, with some risk involved, just to see your favourite band or team live.

Still, is it the future of ensuring a ticket at face value? Because it is not illegal to use bots in Ireland, some consumers utilise them for personal use, not to make a resale killing. From ticket sales to restaurant bookings,any ordinary decent developer can make life easier by scripting a piece of code.

Darren Redmond, a software developer and lecturer at Dublin Business School, told The Irish Times: “This kind of bot technology would have started in the early 2000s, when developers were trying to buy tickets on different sites. And they realised instead of having to go at 9am and queue and keep pressing the refresh button, they’d just write a little script that’ll go along to Ticketmaster.ie, press the button, bring up the page, select the appropriate options and pay the fee.”

“I might be in a meeting,” Redmond says, “so the little script I’ve written has gone off, bought the ticket and used my credit card. It’s just automated that aspect for me, and then will come back later on and tell me it’s booked the tickets for me.

“Of course, it’s easy to see where some people can use the technology to obtain tickets for touting if they have access to several credit cards. In this situation, Redmond can identify with those who are using the traditional method of purchasing tickets,

“For me being the end user, looking to buy four tickets to a concert like Robbie Williams or U2, then it is an absolutely massive problem. It’s grand a few people buying tickets because they want them. But you extrapolate that and all of a sudden an organisation will come along and use a bot to buy 4,000 tickets because they’ve got 1,000 credit cards available to them.”

For three years there have been calls for anti-bot legislation in the UK. After Monday’s U2 ticket debacle, we can probably expect similar lobbying here – either that, or we will all need to learn the robot automated process in order to compete with the bots in the hands of ticket touts.

1 Who are Ireland’s 17 billionaires?
2 Are there annual limits on inheritances or gifts to a child?
3 My father in a nursing home wants to gift me his house
4 Prime Dublin 4 apartment portfolio for €8m
5 Strategic land holding in Galway city for €3m
Real news has value SUBSCRIBE