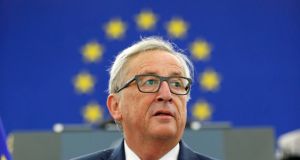 European Commission president Jean-Claude Juncker highlighted the initiatives in an annual state of the union address that sought to counter Euroscepticism with concrete examples of how technocratic institutions in Brussels can deliver improvements to people’s everyday lives.

Telecoms firms, including Irish companies such as Three, Vodafone and Eir, have been lobbying intensely for more flexible rules allowing them to boost revenue and invest in costly fast broadband to help the bloc catch up with the US and Asia.

The plan, part of a drive to create a “digital single market” in the EU, suggests all European households, rural or urban, should have access to superfast connectivity offering download speeds of at least 100 mbps, while all urban areas as well as major roads and railways should have uninterrupted 5G coverage.

Only eight of the top 100 global tech companies are headquartered in Europe, according to a AT Kearney study.

The unveiling of Mr Juncker’s reform plan starts what is expected to be a fierce fight among EU politicians, member states and industry groups before it can become law.

“When you travel in Europe with your mobile phone, you will be able to feel at home anywhere in Europe thanks to these new roaming rules,” Mr Juncker told the European Parliament in Strasbourg.

In a surprise move this month before the speech, Mr Juncker withdrew proposals to limit the number of days consumers can use their mobile phones abroad without paying extra fees after criticism that the rules favoured telecoms firms.

Alto, the Irish umbrella group that represents non-Eir firms, gave a cautious welcome to what it called a review of the EU telecoms regulatory framework, while noting the preservation of market power and greater access to incumbent would be crucial to safeguarding competition.

“Reinforcing the Significant Market Power (SMP) access regime currently in place, which is based on regulatory obligations on dominant operators, is an important element to achieve our goal of a Connected Society,” Alto chairman Ronan Lupton said.