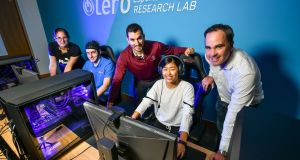 Software research centre Lero has opened Ireland’s first esports research lab as it tries to identify the traits that make the best gamers.

The lab, at University of Limerick, will carry out studies aimed at improving the performance of both amateur and professional players in the growing esports scene, examining things such as mouse grip, peripheral vision and aural range.

One potential application is in psychometric software, using eye tracking and brain imaging to measure the neural, cognitive and physical attributes of the most effective players.

“This is a massive growth sector. Top professional players can earn millions of dollars per annum. However, unlike other professional sports, there has been very little application of sports science to the participants to date,” said Dr Mark Campbell, director of the Lero esports research lab. “Our research lab will combine health science and computing to identify what makes a great player.”

This is not Lero’s first attempt at analysing esports; the centre has already analysed players at international tournaments for Counter-Strike: Global Offensive and League of Legends.

1 Who are Ireland’s 17 billionaires?
2 Are there annual limits on inheritances or gifts to a child?
3 Fianna Fáil may have just pressed the pause button on the property market
4 Fallon & Byrne gets permission for extension in Exchequer Street
5 O’Flynn ‘very unhappy’ with extra payments to former employee, court hears
Real news has value SUBSCRIBE