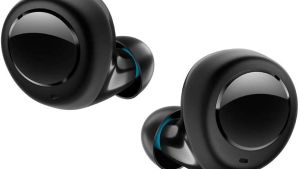 Each earbud weighs 7.6g, heavier than the Airpods Pro at 5.4g and the Samsung Galaxy Buds+ at 6.3g. It seems minimal, but when they are hanging out of your ears, you feel it.

Where to buy: www.amazon.co.uk

Bluetooth earbuds used to be a novelty, something expensive and rare that you didn’t see too often. But in the past couple of years there has been an explosion in the number of wireless earbuds available – and the surprising thing is that they are actually good. Apple’s Airpods certainly stimulated interest in the sector, and Samsung’s Buds and Buds+ provided an alternative for non-Apple users. With Bose, Sony and Huawei also offering wireless earbuds, there’s a lot to choose from these days.

So it’s a crowded marketplace that Amazon has decided to enter. When the company unveiled the Echo Buds last year, it was a clear signal that Amazon is serious about getting Alexa out of the home and into your everyday life.

There’s a lot that I like about the Amazon Echo Buds. The Alexa integration –provided you are a fan of the smart assistant – works well. The sound quality is good; the noise reduction equally so.

But there was one stumbling point for me out of the box: the size of the earbuds. Apple’s original Airpods never really suited my ears, not for long term wear at least; ditto for the Echo Buds. Each earbud weighs 7.6g, heavier than the Airpods Pro at 5.4g and the Samsung Galaxy Buds+ at 6.3g. It seems minimal, but when they are hanging out of your ears, you feel it.

In saying that, the weight didn’t necessarily make them uncomfortable to wear. But the Echo Buds are also noticeably bigger than their rivals; even the case is larger than Apple or Samsung’s version. It’s the size that made them slightly uncomfortable for me, something that may not be an issue for someone with differently shaped ears. There are swappable silicon tips to make sure you get a good fit inside your ear, and different sized “wings” that you can put on the earbuds to make them sit comfortably. Amazon has done as much as it can to cater to as many people as possible.

Fit aside, what about the sound quality? Amazon worked with Bose on the earbuds, using the audio company’s Active Noise Reduction technology. It works well, blocking out a lot of the everyday commute noise. Is it better than Apple’s Airpods at cutting out unwanted noise? No, but then there is also a significant difference in price between the two products so you would expect to get more for your money. In saying that, the Bose Noise Reduction Technology works well, and isn’t too far behind the more expensive earbuds.

The audio quality itself is good, and like its rivals, Amazon has fitted out the Echo Buds with touch sensitive panels to control certain functions such as music controls, activating Siri or your phone’s digital assistant, or switching between transparency and active noise reduction. You can customise what each panel does. However, activating the panels can be a bit difficult at times, and on more than one occasion, it took a hefty tap to get the track to pause. The panels are also easily activated when putting the buds in your ears, which can be frustrating.

These are Amazon Echo Buds, which means Alexa is an integral part of the product – if you want it.You can choose between the wake word or activating Alexa manually, and active, Alexa can control some of your phone’s functions. That includes your Spotify playlists, for example. If you are already tapped into Alexa, then this is more of the same. As a third party assistant though, it won’t have the same level of access that you get with Siri on your iPhone, for example, or Google Assistant on your Android device.

Bose’s Active noise reduction technology strips out a lot of background noise, although you will still get some of the outside world leaking in. The ear buds are customisable too, from the ear tips to the touch panels. If you are a fan of Alexa, having the digital assistant built in is a great addition; if not, the earbuds are still worth having.

The touch panels can be a bit temperamental at times, easily triggered in some instances, requiring a bit of force at others. They are also a little heavier and bulkier than other wireless earbuds, even down to the case – which doesn’t charge wirelessly.

The Alexa integration set these earbuds apart – as does the slightly cheaper price.

I want to change my will quickly in case I fall ill. Do I need a lawyer? 05:50
Cold water poured on idea of ‘helicopter money’ 05:46
Stocktake: ‘Stay long humility and short hubris’ 05:40
Read all about it: young people are willing to pay for news online 05:34
Stocktake: March was the ‘craziest’ month in market history 05:30